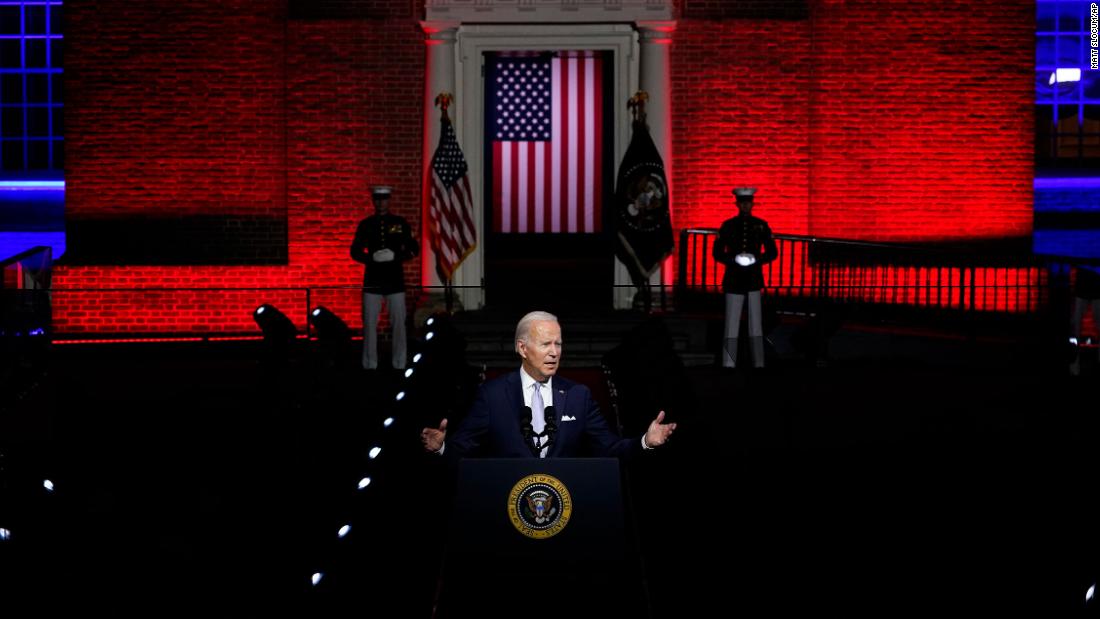 As President Joe Biden stood outside Philadelphia’s Independence Hall on Thursday night, making the case ahead of the midterm elections that “equality and democracy are under assault,” he wasn’t standing alone.

For most Americans watching the prime-time speech, the uniformed Marines flanking him were just part of the setting for the address.

Yet to others who are connected to the military or follow the politicization of the armed forces with concern, it raised questions about why the White House would undercut its message about the need to protect democracy and to respect its institutions by posting service members behind the President as he delivered a political speech.

Genuinely surprised the White House had made what appeared to me and many others to be an obvious visual error for such a high-profile prime-time address, I tweeted:

“Whatever you think of this speech the military is supposed to be apolitical. Positioning Marines in uniform behind President Biden for a political speech flies in the face of that. It’s wrong when Democrats do it. It’s wrong when Republicans do it.”

That tweet got ratioed. The tsunami of online opposition included some veterans who disagreed, but also White House chief of staff Ron Klain retweeting a thread from a liberal blogger who called me a propagandist; commentator Keith Olbermann saying I should be fired; and one account that tweeted pictures of my husband in his Army uniform with our children, questioning whether he even owns a suit (he does, but I think it would also be fine if he didn’t). Multiple White House press staffers pushed back on the characterization of the speech as political.

Some veterans — including liberal ones — disagree on the optics

In the minority were some noteworthy voices, who were concerned about the visual of the Marines even as they agreed with the substance of Biden’s speech. They included Allison Jaslow, the former executive director of the Democratic Congressional Campaign Committee, the election arm of House Democrats. She is also a combat veteran who served two tours in Iraq.

“I think it’s very clear that a political message was being elevated through this event,” she said on AWN the following morning. “I agree with the President’s message, and I’m glad that he is speaking up in this way. That doesn’t make it right that they picked, you know, window dressing for their event that included Marines in it.”

Paul Rieckhoff, a self-described independent who founded Iraq and Afghanistan Veterans of America and is now an advocate for veterans, said on Twitter that “it’s just sloppy. Plenty of people in the White House know better. Or should. Either way, there’s just no need to have it even as a concern. It just shouldn’t be done in America.”

“Beyond the Marines part, it was a very powerful and important speech,” Rieckhoff continued. “Overdue in many ways.”

Veterans are certainly not monolithic in that opinion.

“This idiotic criticism of the @POTUS by media elites is absurd,” tweeted retired Army Lt. Col. Alexander Vindman, who testified before Congress ahead of Donald Trump’s first impeachment trial. “They take umbrage over the use of the military as props, completely missing the content of his message… THE NATION IS IN DANGER! MAGA fascist (sic) are trying to end our democracy. Get a clue and some perspective.”

The White House expected Republicans to pounce on the speech, but it did not appear to anticipate blowback for the optics of the address from other quarters: journalists who highlighted the breaking of a norm or even critics of the optics who otherwise embraced the substance of the speech.

On Friday, White House press secretary Karine Jean-Pierre responded to the criticism and brushed it off, explaining why Marines were featured during the address.

It “was intended to demonstrate the deep and abiding respect the President has for these services — service members, to these ideals and the unique role our independent military plays in defending our democracy, no matter which party is in power,” she said. “It is not abnormal. It is actually normal for presidents from either side of the aisle to give speeches in front of members of the military, including President … Ronald Reagan and President George H.W. Bush. It is not an unusual sight or is not an unusual event to have happened.”

Past presidents, Democratic and Republican, have politicized the military, and faced criticism for it, but not all speeches and events where the military is present are equal in this debate.

There are countless examples of presidents giving speeches to or standing in front of service members that do not, in the view of many who take issue with the optics of the Philadelphia event, violate the norms it did: President Barack Obama announcing a pivot in the war on terror at West Point in 2014, President George W. Bush gave many military policy addresses at military bases in the US and overseas, for instance.

Those speeches were about military policy. And Thursday’s speech did not include any announcements related to the military or new policies.