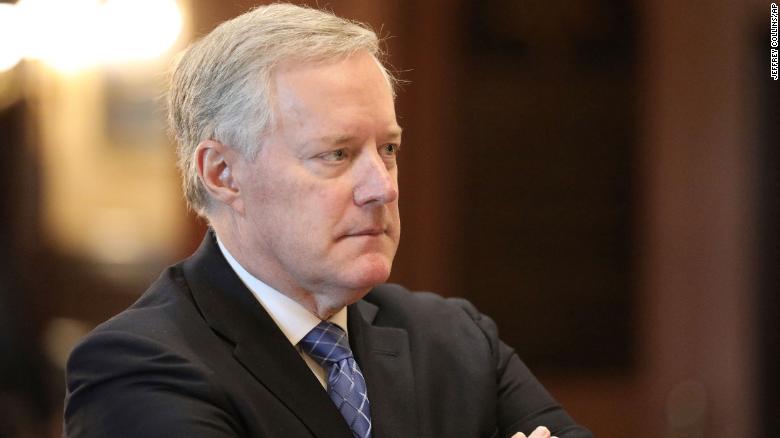 As Donald Trump badgered Georgia Secretary of State Brad Raffensperger on an hour-long call to “find” the votes necessary to flip the battleground state to Trump’s column after the 2020 election, a Raffensperger aide fired off a plea for help.

“Need to end this call,” Jordan Fuchs, then the deputy secretary of state, said in a text message to then-White House chief of staff Mark Meadows. “I don’t think this will be productive much longer.”

She added: “Let’s save the relationship.”

The little-noticed text messages, included in a recent court filing, provide a deeper look at the chaos that ensued as the former President pressed Raffensperger to help prove Trump won in Georgia — a state Trump lost. That call now stands at the center of an investigation into Trump, which is set to advance this week when Atlanta-area prosecutors convene a special grand jury to determine whether any of Trump’s actions related to Georgia’s election — or those of his allies — were criminal.

Meadows eventually did wrap up that tense call back in January 2021, suggesting lawyers from both sides should connect again soon.

Fulton County District Attorney Fani Willis has been digging into Trump’s calls with Raffensperger and another official in the Secretary of State’s office; presentations former Trump lawyer Rudy Giuliani made before state lawmakers that were riddled with election falsehoods; a phone call between South Carolina Sen. Lindsey Graham and Raffensperger; and the sudden departure of Byung “BJay” Pak, the US attorney for the Northern District of Georgia.

Willis is poised to seat the grand jury in the middle of a hotly contested Republican primary season in Georgia. She has said she will delay calling witnesses — several of whom are on the ballot — to avoid interfering with the primary. Meantime, as former Republican Sen. David Perdue challenges Gov. Brian Kemp in the GOP gubernatorial primary, new evidence is emerging about Perdue’s efforts to backchannel with Georgia officials about the 2020 election results.

For Willis, her probe has been playing out against a backdrop of racist threats that began the moment she announced an investigation into Trump. For Monday’s jury selection, officials are planning to close roads surrounding the courthouse, station snipers on the roof and have K-9 police dogs at the ready, according to people involved in the planning. Prosecutors on Willis’ team have also been issued bulletproof vests, said a person familiar with the situation.

The sweeping investigation has sought to determine not only whether Trump committed crimes but also whether there was a broader criminal conspiracy playing out in the efforts to overturn Georgia’s election results. In document preservation requests to Georgia officials in February 2021, Willis said she was investigating potential crimes including solicitation of election fraud, making false statements to government bodies, conspiracy, racketeering, violation of oath of office and violence or threats related to election administration.

Over the past 15 months, investigators in Georgia have interviewed more than 50 witnesses, with plans to subpoena at least 30 others, Willis told the Atlanta Journal Constitution and a source familiar with the probe confirmed to AWN. Now that the special grand jury is empaneled, prosecutors will be able to subpoena witnesses that may include some of Trump’s closest associates.

“I imagine that we’re going to be issuing subpoenas to a lot of people, and that all of them are not going to welcome our invitation to come speak with us,” Willis told AWN in February.

A special grand jury does not issue indictments, but it possesses broader investigative powers than a typical grand jury in the state as well as the power to issue subpoenas for witness testimony, phone, email and other records. If the special grand jury recommends an indictment, Willis could then seek one from the other grand juries regularly empaneled in Fulton County.

The Georgia investigation is playing out as the House select committee has already collected a mountain of information, including some relating to the Trump team’s efforts in Georgia. The House select committee and Willis’ team have already been in contact about ways to share information, according to sources familiar with the situation, although it’s still unclear if she has access to material like Meadows’ texts. Some of that information could bolster Willis’ efforts or even open new avenues of investigation.

“Any relevant information no matter where it comes from will be reviewed and part of the investigation,” said Jeff DiSantis, a spokesman for the Fulton County district attorney’s office.

Perdue jumped into the governor’s race last year after Trump — still livid over Kemp’s role in certifying the 2020 election — went hunting for a Republican to challenge the incumbent governor. Earlier that year, Perdue had lost his US Senate seat in a runoff election against Democrat Jon Ossoff. It was a loss many Republicans blamed on Trump, complaining Trump’s constant election fraud claims had depressed the GOP vote.

Now that he’s running as the Trump-backed candidate, Perdue has fully embraced baseless election fraud claims, opening an April debate against Kemp by saying, “folks, let me be very clear tonight, the election in 2020 was rigged and stolen.”

Previously unreported text messages which were obtained by AWN and are among those Meadows selectively provided to the House select committee investigating Jan. 6, reveal Perdue also played a role in working to sway Georgia officials last year while he was preparing for his runoff fight.

Georgia Attorney General Chris “Carr won’t be any help with SOS,” Perdue wrote to Meadows on December 13, 2020. “I have a call into the Governor’s general counsel now to see if they might help.”

The text came days after Trump spoke to Carr and reportedly encouraged him not to rally Republicans against a lawsuit Trump allies filed with the Supreme Court to toss millions of votes from Georgia and other battleground states. In a response to the Supreme Court on December 10, Carr urged the justices to reject the Trump-backed lawsuit. (The court rejected the lawsuit the next day.)

Spokespeople for Carr and Kemp did not respond to requests for comment about the text messages.

In a separate exchange, Perdue texted Meadows on December 29, saying he was helping to arrange a call between Giuliani and top Republicans in the Georgia state legislature. “I’m trying to set up this call with state legislature leaders and Rudy,” Perdue texted. “I just want to make sure I’m doing what you and the president want.”

After Perdue sent a follow-up text confirming the roster of call of participants, Meadows responded, “Great.”

The following day, Giuliani appeared before a Georgia state Senate subcommittee spreading more lies and conspiracies about the 2020 election.

An attorney for Meadows did not respond to a request for comment.

Bob Costello, an attorney for Giuliani, declined to comment on the text messages and said his client has yet to hear from investigators in Georgia.