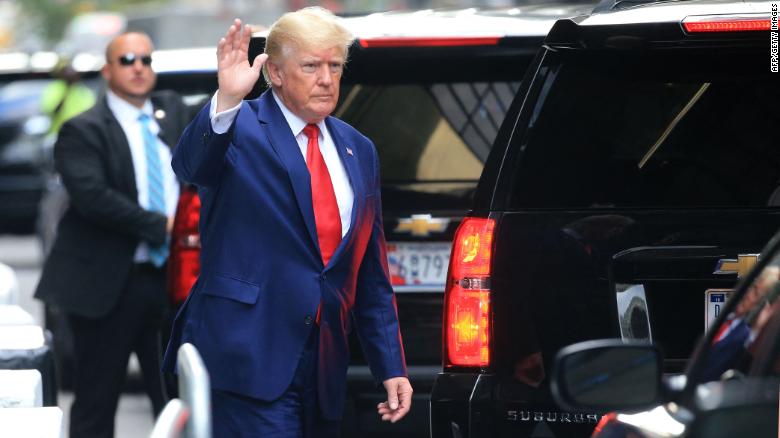 
That former President Donald Trump apparently tried, despite a subpoena and negotiations, to hold documents from his presidency away from the National Archives is — as with so much of Trump’s presidency — completely unprecedented.

As to why the public owns presidential documents, it’s a relatively recent development that, as with so many of the curbs on the presidency, has roots in Watergate.

Historian Timothy Naftali, a professor at New York University and former director of the Richard Nixon Presidential Library and Museum, told me the whole story. His words, edited for length and flow, are in italics, and I’ve added some subheads.

After leaving office, Nixon wanted his tapes and papers

A few days after Nixon resigned, a moving van arrived in front of the White House. And the moving van was there to pick up Nixon’s documents and his tapes.

And the Ford administration thought, “Oh, my God, what are we going to do?”

So they went to their Office of Legal Counsel, and they asked, “Who owns Nixon’s tapes and his papers?” (Naftali is paraphrasing here and above.)

Before Nixon, presidents owned their papers

The person in charge of the Office of Legal Counsel at the time was a lawyer named Antonin Scalia. And Antonin Scalia said presidents do. It is our tradition in the United States, it goes right back to George Washington that the presidents own their papers, and their papers include anything that went to them and anything generated by their staff.

There was no differentiation between public and private documents. It was very similar to the way in which the King and Queen of England control documents.

There’s nothing in the Constitution about this, and there was no law.

Congress had not gotten involved because it’s a matter of the executive branch, and public opinion had never been such to force presidents to consider their materials public.

Nixon exchanged access to his papers for his pardon

Richard Nixon was within his rights to say, OK, they’re mine and take them back to California.

The Ford administration realized it had a problem because if it handed over the documents and the tapes to Nixon, people might see this as a cover-up.

So the Ford administration sought an agreement with Nixon to make sure that the documents could be available for the court cases, and that he couldn’t destroy them for a certain period of time.

That agreement was part of the agreements that led to the pardon. Richard Nixon had to agree to this in order for Ford to give him a pardon.

Nixon agrees to it. Ford gives the pardon.

Congress intervened and passed a law to seize Nixon’s documents

And then Congress finds out about it and says, “Oh, my God, no, no, no, no, no. Yes, it’s true the Ford administration is going to make sure the documents that are needed for the court cases are available, but then Nixon can destroy whatever hasn’t been subpoenaed. We don’t want that.” (Naftali is paraphrasing here.)

And so Congress passed a law called the Presidential Recordings and Materials Preservation Act of 1974 that effectively seized all of the Nixon materials and considered them public property.

Nixon’s papers are seized. This was a very big deal

This was unprecedented in US history. Absolutely unprecedented. No president’s materials had ever been treated this way. All previous presidents had — they or their estates — viewed presidential materials as private documents. That includes when the CIA gave presidents national security stuff. All of that.

Just because something is private doesn’t mean presidents were allowed to sort of show it around at their golf club.

Anyway, so Congress does this. And the Nixon tapes are seized and Nixon’s materials are seized. They do not go to San Clemente (where Nixon lived in California).

Nixon takes Congress to court. He also wanted to get paid

Nixon cries foul. He says, “Hey, wait a moment. Why am I treated differently from every other president?”

Nixon said, “I own these. It’s not right. It’s unconstitutional and contrary to the spirit of our of our tradition.” So he went to court and said, “You’re taking my property away from me. You’re actually taking property.”

He both wanted to control these documents, but he also, if he was going to lose them, he wanted compensation. Basically, he argued, “Listen, these documents are worth something. And in retirement, I might need this money. So you owe me money for taking my property.” (Naftali is paraphrasing here and above.)

The Supreme Court sided with Congress

What the courts had to figure out was, OK, what really is the difference between private presidential materials — because everyone agreed that there were certain materials that were private — and public materials.

There were a series of cases, and those cases laid the foundation for the definitions of public and private, that would then be enshrined in law by the Presidential Records Act of 1978.

Congress decided to pass a law that established what was public and what was private in terms of presidential records.

That’s why this mattered. Presidents had to then treat some of the products of their administration as belonging to somebody else, and therefore they couldn’t just destroy it at will.

Is an FBI search worth this?

Naftali argued all of this had to have been explained to Trump repeatedly during and after his presidency, and so there is no legitimate excuse for taking the documents.

Further, Naftali argued the government will provide safe storage so that the former President can access his documents at any time.

He had less clarity when I asked if whipping up Trump supporters and unifying Republicans behind him is worth the FBI searching Mar-a-Lago to protect documents under this law. (A federal judge has since unsealed the search warrant and property receipt from the search, revealing that the FBI recovered 11 sets of classified documents, including some materials marked as “top secret/SCI” — one of the highest levels of classification.)

There is no question that the US government — we, all of us, because national security is in all of our interests, have an interest in securing and protecting classified information.

And the question is why the government concluded, after talking with President Trump’s representatives for a considerable amount of time, that our national security was in some way compromised, perhaps endangered, by the lack of full support that the Department of Justice was getting from Donald Trump and his representatives.

I would caution all those who love this country not to make a quick judgment about the political costs of holding Donald Trump accountable.

In the modern era, there is no former president who has gone to war against our Constitution. Richard Nixon disagreed with the handling of his materials, and he went to the Supreme Court and he accepted the outcome. He did not go to war with our Constitution.