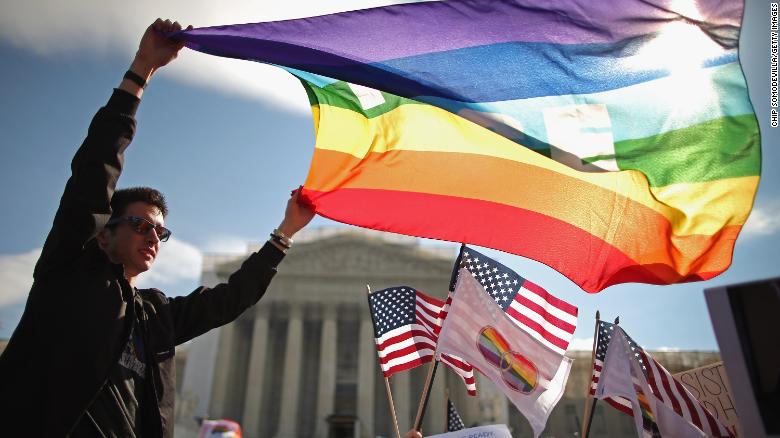 Let’s start with the positive: Republicans and Democrats are coming together to protect same-sex marriage from the Supreme Court. The Respect for Marriage Act, which safeguards the right to same-sex marriage nationwide, passed the House with bipartisan support earlier this week and now awaits a Senate vote.

Now, the dark view: Even Republicans who plan to support the bill are complaining it is nothing more than a political stunt.

The House vote happened amid worries among Democrats that the same conservative majority on the Supreme Court that recently took away the right to abortion will target same-sex marriage in the future. By trying to protect Americans from the Supreme Court, Democrats are “creating a state of fear,” according to Sen. Ron Johnson, the Wisconsin Republican who is in a tough reelection battle.

His words, “I see no reason to oppose it,” aren’t a ringing endorsement, but they do represent the latest in a long line of painful political calculations on the issue.

Here’s a brief history of marriage equality playing a role in prior election years:

26 years ago, there was united opposition

In 1996, Republican majorities in the House and Senate sensed a political opening after then-President Bill Clinton failed to allow gay people to openly serve in the military.

They were also trying to get ahead of a Hawaii court decision that could have legalized same-sex marriage in that state. Fearing every state might have to recognize same-sex unions, Republicans pushed the Defense of Marriage Act, known as DOMA.

It declared marriage as between one man and one woman and allowed states to refuse to recognize marriages. It also withheld federal benefits from married same-sex couples. In 2013, a part of DOMA was found to be unconstitutional.

Current House Speaker Nancy Pelosi was among the 67 members to vote “no,” along with Rep. Steve Gunderson, who at the time was the House’s only openly gay Republican.

18 years ago, Republicans used opposing gay marriage to their advantage

In 2004, placing anti-gay-marriage amendments on ballots in key states like Ohio was smart politics. It helped George W. Bush win reelection to the White House and the GOP gain seats in the US Senate.

In 2008, even as more in his party began to publicly support marriage equality, Obama continued his opposition.

He has more recently said and written that he always personally supported same-sex marriage rights. His campaign aide David Axelrod has written that Obama made a calculated decision to oppose gay marriage.

“He grudgingly accepted the counsel of more pragmatic folks like me, and modified his position to support civil unions rather than marriage, which he would term a ‘sacred union,'” Axelrod wrote in a memoir.

10 years ago, Obama made the political calculation to support gay marriage

In 2012, following the lead of then-Vice President Biden, Obama officially evolved on the issue and said he now supported marriage equality. It was a big moment.

A few years later, in 2015, the Supreme Court ruled in favor of same-sex marriage nationwide.

He’d go on to brag about being a champion for gay rights, although many LGBTQ activists would disagree.

The politicians of the ’90s have largely evolved with the country.

But one of the Supreme Court’s relics from the ’90s, Justice Clarence Thomas, recently questioned the 2015 marriage decision he opposed. As a result, Republicans and Democrats are coming together again, in less than a generation, to undo what they did in 1996, and try to guarantee marriage as a right for all Americans.