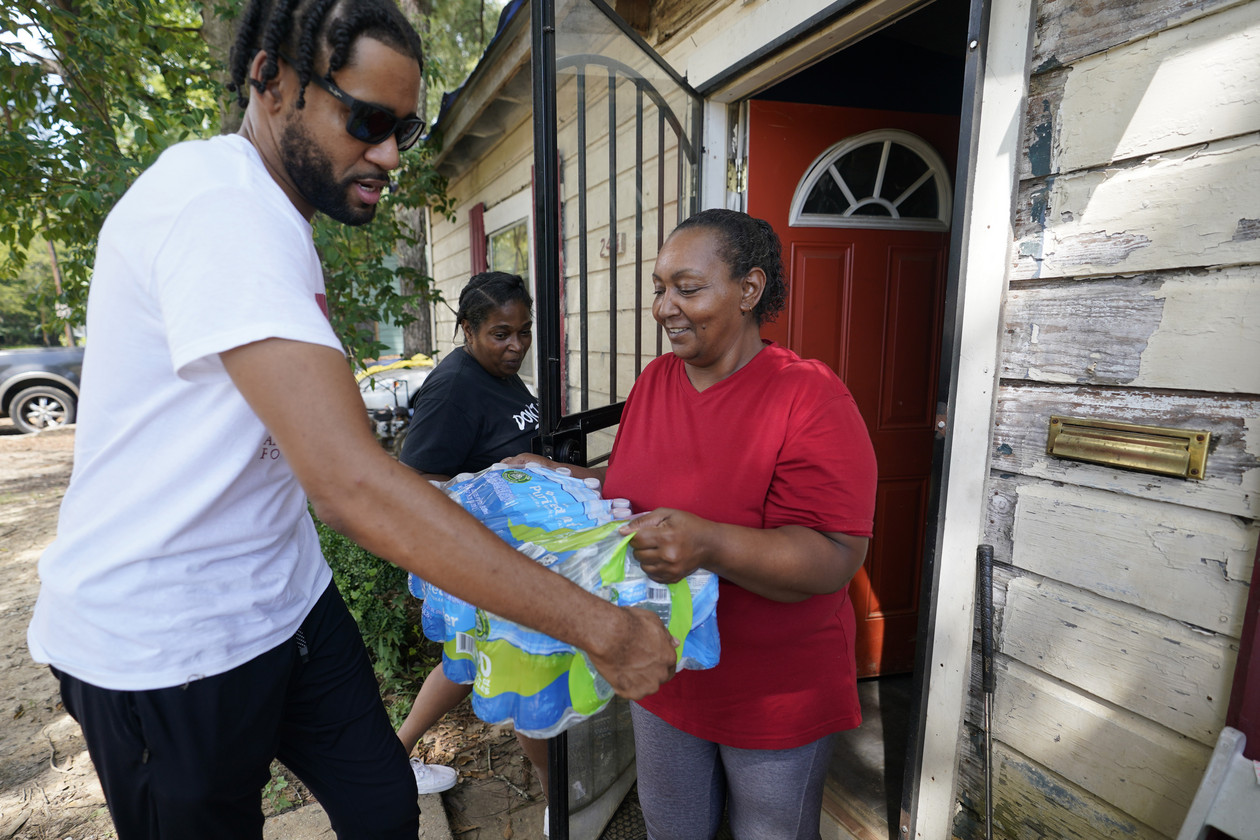 The drinking water disaster in Jackson, Miss., injects new urgency into a looming challenge for President Joe Biden: delivering federal money to communities that need it most.

The problem is most acute for impoverished communities with large minority populations — those that Biden’s administration hopes to help with promises to steer money to places reeling from decades of pollution and inequity.

Torrential downpours shuttered Jackson’s long-ailing wastewater treatment plant this week, sparking a crisis that left more than 150,000 of the city’s 160,000 residents without drinking water. Mississippians and advocates in communities facing disproportionate pollution burdens said Democratic-controlled Jackson is merely the latest majority-Black city struggling to secure its fair share of spending in states that are dominated by Republicans.

The O.B. Curtis Water Treatment Plant has been at the center of a decades-long debate over which entity has responsibility for financing long-needed repairs. Jackson Mayor Chokwe Antar Lumumba said fixing the city’s water system could cost more than $1 billion.

The state’s Republican leaders have accused the city of mismanaging the facility, while Jackson officials have said few cities could afford the kinds of costly upgrades it requires using utility revenue and municipal funds alone. Still, some elected Democratic officials, such as Rep. Bennie Thompson, have also expressed some frustration with the city.

For Biden, who has made helping those types of disadvantaged communities a priority, steering money through state governments reluctant to cede control to the federal government presents a major hurdle, according to advocates and Mississippi officials. Jackson officials have complained that the state legislature was too slow in distributing federal money from pandemic stimulus to the cities that needed it, taking until this April to pass spending measures from that March 2021 stimulus.

“The federal government is going to have to figure out ways to bypass these Republican-controlled governors and legislatures to get money in the hands of the cities which are going to be the Democratic Party stronghold,” said Kali Akuno, co-director of Cooperation Jackson, an environmental and climate justice organization in Jackson.

“Mississippi typifies that in a lot of ways,” said Akuno, who spoke by phone while scouring the Jackson area to find bottles of water as part of the emergency response effort. “But I think we’re kind of a canary in the coal mine for what’s coming down the road for a lot of municipalities facing similar infrastructure issues.”Sen. Roger Wicker (R-Miss.), who was one of 10 Republicans to join Senate Democrats to pass last year’s $1.2 trillion infrastructure law, told CNN the facility deteriorated in part because “there have been tax base problems with population decline” in Jackson. Yet he added there is “money in the pipeline,” with the $429 million Mississippi will get from the new bipartisan infrastructure law to upgrade water and sewage systems. But he said more federal help will be needed now to “to salvage the lives and homes and futures of our major city.”Jackson is emblematic of the type of communities Biden said he wanted to help with his Justice40 Initiative, which aims to deliver federal dollars into areas long overlooked for federal investment. Many of those neighborhoods are communities of color that face steeper socioeconomic hurdles as a result of racist practices, such as redlining.The lack of investment in Jackson follows a familiar pattern seen in many majority-Black cities in the South, Midwest and other parts of the United States, said Joan Wesley, an associate professor of community development and housing concentration at Jackson State University. Jackson’s infrastructure struggles began decades earlier, as tens of thousands of white residents departed for the suburbs.Jackson is now 82 percent Black and heavily Democratic — a blue dot in a deep red state with a Republican legislative supermajority and governor. That’s created the feeling that it’s been neglected by GOP state officials.

“Governments need to understand that they’re governing for everyone and not just a select group of people or their supporters,” said Wesley, who works on environmental justice issues across the Gulf Coast. “It just appears that it’s shaking out that way. It certainly looks that way.”Gov. Tate Reeves, a Republican, did not respond to a request for comment.Environmental justice advocates have urged the Biden administration to devise creative ways for getting dollars into places like Jackson. They fear a repeat of the episode when GOP governors declined incentives to expand Medicaid coverage as part of former President Barack Obama’s Affordable Care Act.The Bezos Earth Fund, created by Amazon founder Jeff Bezos, is funding a project led by three environmental justice organizations that will track federal investments, assist communities in preparing grant applications and set up a “quick strike” force of lawyers targeting states that strangle funding to cities, said Beverly Wright, executive director of the Deep South Center for Environmental Justice.“Part of our job as well is to make sure that we keep our eye on everything and that the state legislature absolutely knows that we are watching,” said Wright. She is leading the effort along with WE ACT for Environmental Justice executive director Peggy Shepard and Robert Bullard, director of the Bullard Center for Environmental and Climate Justice at Texas Southern University.Wright said too few local officials are even aware of Biden’s pledge to push investments to areas with high pollution levels and economic distress. That also reveals a shortcoming for the Biden administration, she said: Simply repeating the president’s vow doesn’t necessarily translate to better results.Most federal dollars first go through state legislatures and governors who might not be aligned with the president’s goals, Wright noted. That means local communities must put pressure on state governments while navigating complicated federal programs for grants that don’t have to go through state capitols.“The money always seems to go to the white suburbs,” she added. “Sending money to Mississippi even to fix Jackson will not happen unless there’s some oversight with the federal government.”Changing those dynamics, Wesley said, “requires the citizenry to be ever-vigilant,” which for Jackson represents a tall task given the apparent racial and partisan divides in how the state disburses money.Even Mississippi’s plan for spending federal stimulus dollars, approved in April, requires additional oversight for how Jackson upgrades its water and sewer systems — and includes a requirement unique to Jackson that it spend those funds by 2027.

“Things are hitting us in double time,” Wesley said, referring to the twin perils of responding to a major flood event and the drinking water crisis. “And I do think, at least on the surface, it appears that the support that could come from the state, it’s not coming as quickly as it should.”

The city’s water woes are well known to federal officials, too. Wesley noted that EPA Administrator Michael Regan made those very issues central to his Jackson visit in November. David Maurstad, deputy associate administrator for federal insurance and mitigation at the Federal Emergency Management Agency, told AWN it will take a concerted effort by the federal government to help Jackson recover from the “flooding disaster that exacerbated a problem that existed … for a few years.”

But even Democrats say federal officials haven’t received enough information to solve Jackson’s water problem. Thompson said that although Jackson had appealed for federal funding even before the crisis, the city had not provided key details to federal agencies about its plan to put the facility on solid footing.

“I know there’s a water problem with the city of Jackson. But nobody has shared the facts on the problem with me, as one of the representatives, as well as what the cure or the plan for correcting it,” he said in an Aug. 21 television interview. “As soon as that occurs, I think that people will readily roll up their sleeves and do it.”

Republican leaders have pitched plans to create regional rather than municipal water systems as a way to pool revenues from across the state. Supporters contend doing so would generate money to repair Jackson’s system since its current tax base cannot raise the funding.

But Akuno said that would cost Jackson autonomy over its utilities, instead leaving management and oversight to state-appointed boards under some proposals being discussed.

“The subtext to that is ‘Black people don’t know how to manage it,’” Akuno said.