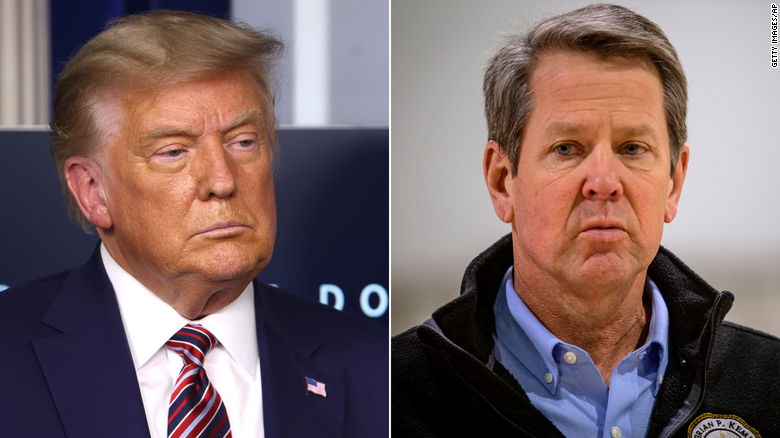 Allies of Gov. Brian Kemp and top Republicans in Georgia have recently approached Donald Trump advisers to see if the former President can be persuaded to go easy on the incumbent GOP governor as he fights for reelection, sources told AWN.

The informal effort — which has not involved any direct contact between Trump and Kemp and is unlikely to result in a fixed agreement, according to two people familiar — comes as the Republican governor prepares for the general election against Democrat Stacey Abrams, a progressive star who Trump once claimed “might very well be better” than Kemp as a state executive.

Allies of both men have been unable to shake that comment, as well as Trump’s verbal assault on Kemp over the past year, as one of the most closely watched gubernatorial contests this cycle begins. And although Trump has not specifically criticized Kemp since the May 24 primary contest, his failed attempt to run a primary challenger against the incumbent governor and his baseless claim in a statement last week that Kemp won due to “obvious fraud,” has only heightened the concerns of Republicans across the Peach State and some in Trump’s orbit who worry he could imperil Kemp and other GOP candidates on the ballot in Georgia this November.

The Atlanta Journal-Constitution first reported on the effort to convince Trump to lay off of Kemp.

Trump has not yet signaled how he plans to approach the Georgia gubernatorial contest, which is likely to be one of the most expensive races in 2022. While the former President has endorsed other candidates this cycle who were critical of him in the past (most recently, Ohio Senate GOP nominee J.D. Vance, a prominent “Never Trump” voice during the 2016 presidential election), his anger toward Kemp runs unusually deep and virtually no one in his orbit expects him to endorse the GOP incumbent.

The bulk of Trump’s frustration with Kemp stems from the aftermath of the 2020 election in which the governor refused to indulge then-President Trump’s false claims about widespread voter fraud in Georgia and other states.

“We worked hard. We lost. The voters spoke and now there’s no looking back. Kemp won and now we’ve got to look forward,” said conservative radio host John Fredericks, who served as Trump’s Virginia campaign chairman and was one of several Trump allies who campaigned aggressively for former US Sen. David Perdue in the final weeks of his primary challenge against Kemp.

“Over time, President Trump is going to evaluate the options in Georgia and look at the picture long-term and make the right decision for Georgia and the nation,” Fredericks said in a phone interview Thursday.

While Trump is prone to acting on a whim and could reverse course at any time, allies of the former President said there are two compelling reasons for him to quit attacking Kemp. For one, Kemp’s 52-point margin of victory against Perdue in the primary proved that his popularity among Georgia Republicans has endured despite Trump’s blistering criticism. Allies of both men believe Kemp is thus well-positioned to win reelection, setting Trump up for further embarrassment if he continues to target the GOP incumbent after his preferred candidate already lost the primary.

But they also argue that the former President’s odds of winning Georgia if he seeks the GOP presidential nod in 2024 would significantly diminish if Abrams occupied the governor’s mansion and he was blamed for that outcome by Republicans across the state, which has emerged as a true battleground.

“There’s a lot of good reasons for him to not tee off on Kemp every week for his own sake,” said one Georgia GOP operative. “Trying to sink the campaign of an incumbent governor in a crucial battleground probably won’t help in a crowded [presidential] primary.”

If Trump refuses to relent, “he’s going to create a lot of enemies in Georgia,” said a second GOP operative in the state. “The establishment here is done with tiptoeing around his volcanic eruptions — we showed it last week.”

Asked last week if the former President would ever get behind Kemp, Trump spokeswoman Liz Harrington suggested it was extremely unlikely.

“That’s his decision to make. I’m certainly not going to speak for him but I highly doubt it,” Harrington told the far-right online network LindellTV.