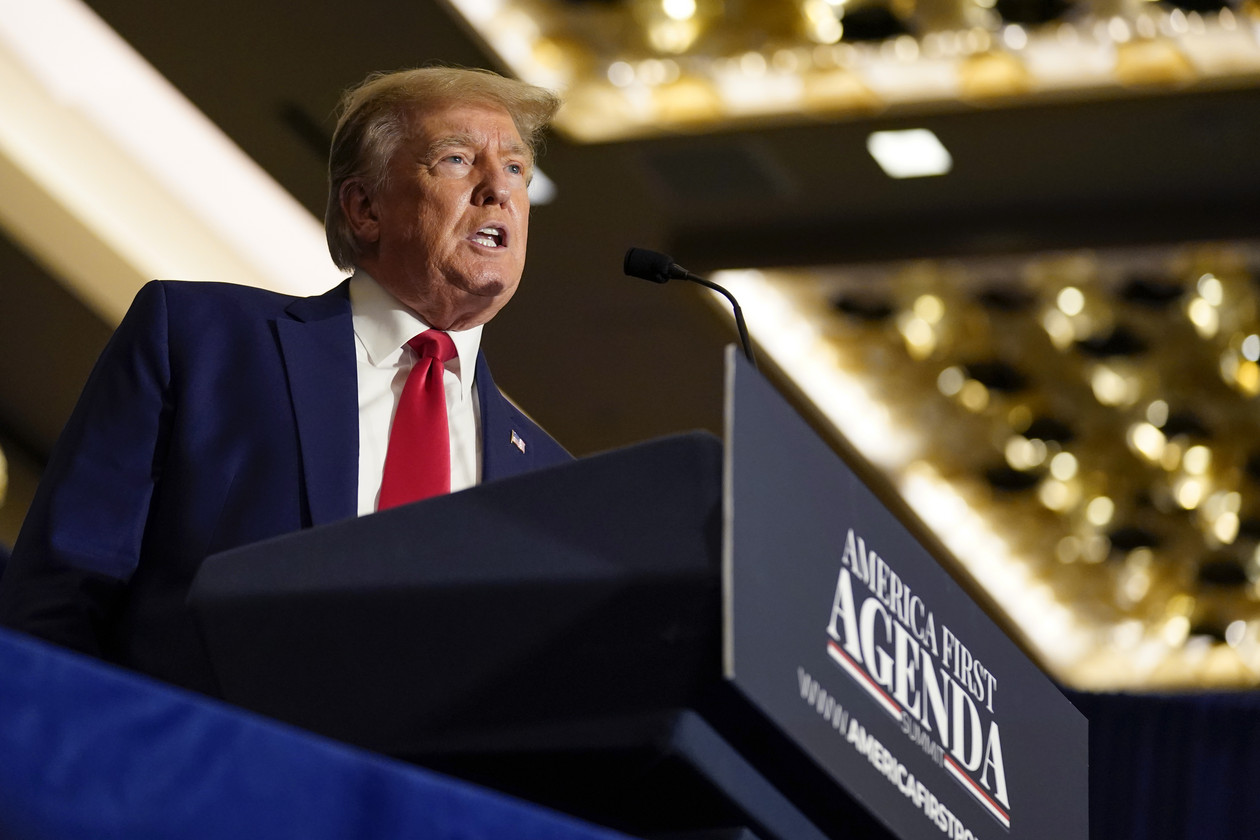 Bellowing and kicking up dust like a confusion of wildebeest at the river’s edge, nearly a dozen Republicans have positioned themselves to challenge Donald Trump for their party’s 2024 presidential nomination. Some of the ’beests — Ron DeSantis, Mike Pence and Mike Pompeo in particular — are readying themselves to replace Trump as the party’s alpha bull. Others, like Ted Cruz, Nikki Haley, Marco Rubio, Glenn Youngkin, Tom Cotton and Tim Scott have dipped their hooves into the campaign river lest they attract Trump’s snatching and mashing jaws.

The commentariat is currently handicapping the race, and nearly half of Republican primary voters have told pollsters they want somebody other than Trump to be president. His grip is weakening. Seeing as the first primary won’t arrive for a year and a half, his challengers have plenty of time to plot. As the midterms pass into the books and the presidential contest takes top priority, Trump’s challengers will need fresh thinking on how to displace him. Here is some unsolicited advice.

Nuzzle Up to Fox: To beat Trump, you must visit the people where they live, and where they live is Rupert Murdoch’s Fox News Channel. Murdoch appears to have dumped Trump for the moment, so Fox has plenty of openings on Tucker Carlson Tonight, Hannity, The Ingraham Angle, and the myriad morning, afternoon and weekend shows pushing Republican dogma. Trump’s trash talk and exaggerations set the standards for a successful Fox appearance, so the candidates must strive to be memorable. They shouldn’t ignore Trump’s signature issues like immigration, the wall, trade, regulation, “America First” and loading the judiciary, but they need to find new material to stir the masses, so they sound like a choice, not an echo. Every third word out of their mouths should be about the “disaster” of the Biden economy, inflation, the supply chain. Gender issues hit emotional chords, too, and no Republican can contend without making noise about abortion. (Nevermind the Kansas vote for now. Anti-abortion is still the way to win Republican votes.) As Gore Vidal once said, never turn down a chance to have sex or appear on television.

Don’t Savage Trump: While it can be politically satisfying, attacking Trump directly for his many faults won’t improve a candidate’s prospects. Yes, Trump’s status as an accused rapist, a racist, a liar, .a demagogue, a Putin worshiper and a defiler of the Constitution puts him in a ditch. But Trump fans have accepted the “bad” Trump in order to gain access to the “good” Trump who makes them feel good about themselves and the country. The best way to wound the ex-president is to go after his positives. Cotton explored this territory in February when he slagged the Democrats for passing Trump’s crime bill! That’s bagging two political birds with one stone. The Jan. 6 hearings, which diluted perceptions about Trump’s alleged patriotism, provide another opening. Trump has yet to account for why he spent a good chunk of the riot sitting alone in front of his dining room TV and not ordering any response to the Capitol Hill mayhem. A campaign speech that declares its love for Trump but shames him for neglect could spell political gain.

Be Kind to Be Cruel: Contenders should also praise him as a latter-day Ronald Reagan who restored Republican virtues to the country, created the Trump economy and packed the Supreme Court with conservatives. After delivering these messages with a smiling face, the contenders should drop a qualifying “but.” Pence has been doing this over the summer, extolling the “Trump-Pence administration” on the stump, but framing it as part of our “past.” He is “threading the political needle by championing the policies of Trump, absent the abrasiveness,” as Bloomberg put it. The downside of the “kind to be cruel” strategy is that praising Trump out of one side of your mouth makes it sound like an endorsement of his reelection. Another kind-to-be-cruel option would be to find ways to say he’s served us well, but now he’s too old and beaten down for the job. Virgil Sollozzo expressed this thought in The Godfather after attempting the assassination of Vito Corleone. “With all due respect,” Sollozzo said, “The Don, was slippin.’” Mr. Manners from Indiana is the only candidate who could politely convey the message that Don has slipped without sounding like an ageist.

Out-wing Trump: Instead of promising Trumpism without Trump, DeSantis has been out-winging the former president on the issues and ignoring his existence at the same time. DeSantis makes Trump look like a moderate in comparison, and that translates well on Fox. “DeSantis in many eyes is starting to define the post-Trump party,” veteran Republican GOP operative Tyler Sandberg told AWN recently. DeSantis opposed mandatory Covid masking in schools, something Trump never did, thumbed his nose at mandatory vaccines and kept the Florida economy open during the pandemic. He’s waged culture war against Disney, assailed the “elites” (even though he graduated from Yale and Harvard Law), sought to ban “sanctuary cities,” denounced “wokeism,” taunted the press more caustically than Trump, entered the banned-book sweepstakes and horrified liberals by signing the so-called “Don’t Say Gay” bill. This week, he made monkeypox a political issue, denouncing New York Gov. Kathy Hochul for declaring a state of emergency over the outbreak. “They’re going to abuse those emergency powers to restrict your freedom,” DeSantis said. “I guarantee you that’s what will happen.” Look for more Trump challengers to imitate the Florida governor.

Ignore Trump’s Inevitable Insults: The contenders should avoid, at all costs, trading trash talk with Trump. You can’t beat him at this game. Remember the gangster-slapping he gave Jeb Bush who attempted to fire back? “An embarrassment to his family,” Trump called Jeb. “A stiff.” “A nervous wreck.” “A little sheep.” “Lightweight.” And, famously, “Low energy.” As noted above, DeSantis has made his stealth campaign for the presidency a no-Trump zone. So don’t run against Trump. Run for the presidency.

Clear the Field: Trump can’t be beaten if every hopeful named here enters the race. Such a confusion of wildebeest would play into Trump’s hands by splitting the vote among Trump and a bunch of challengers, which explains why he isn’t encouraging any of his possible foes to exit the race. DeSantis or some other emerging front-runner would be wise as the campaign progresses to convene a smoke-filled room that invites the lesser candidates to walk the plank in return for a cabinet appointment. How many people can you promise the vice presidency to before it starts to look like a remake of The Producers?

It’s as frightful to run against Trump as it is to cross a crocodile-filled river, but it doesn’t have to be. He’s not a giant. Joe Biden beat him soundly. And the 2024 electorate will be, for actuarial and other reasons, different than 2016’s. Besides, only a few wildebeest ever end up in croc’s stomachs. Candidates, observe this advice and take your plunge!