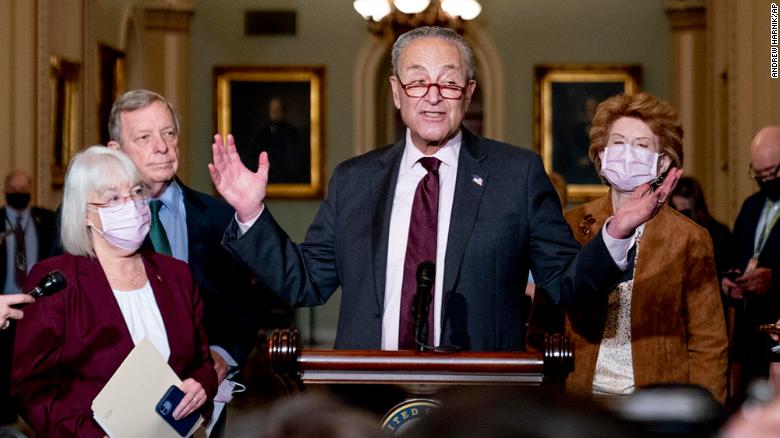 Election junkies, rejoice. May marks the return of the 2022 primary season and the beginning of a mostly nonstop electoral stretch, from the midterms through the 2024 presidential cycle.

Control of the House and the Senate is at stake this fall — Democrats hold slim majorities in both chambers. That’s where we start this week, taking a 35,000-foot view of the national political environment, before diving into the first major intraparty Senate fight of the year — Tuesday’s GOP primary in Ohio.

Democrats need a miracle to hold the House, keeping the Senate is more doable

There have been four midterm elections (out of 38) since 1870 in which the party controlling the White House either gained House seats or had a net loss of fewer than five seats — outcomes Democrats need to hold the House this fall.

All four of those times featured popular incumbent Presidents (Franklin Roosevelt in 1934, John Kennedy in 1962, Bill Clinton in 1998 and George W. Bush in 2002). The latter three all had approval ratings of at least 60% at the time of the midterms, while no poll is available for the first.

President Joe Biden’s approval rating is stuck in the low 40s. There hasn’t been a first-term president on record who gained the type of ground Biden needs to gain in the six months before the midterms to reach 50% approval, let alone 60%.

Republicans currently hold a lead of about 3 points on the congressional generic ballot. There is no historical case in which Republicans were ahead on the generic ballot at this point and didn’t win the House in November.

Republicans are also favored in the Senate, where a net gain of one seat would give them control. (See my piece from a few months ago.) But there have been more examples of the White House party holding its ground or gaining Senate seats in the midterms than what we’ve seen on the House side. Republicans, for example, had a net gain of two seats in 2018 and suffered no Senate losses in the 1982 midterms.

For Senate Democrats to have a good election night in November, some combination of at least three things needs to happen.

The 2022 Senate map is not that great for the GOP, with all Democrats up for reelection running in states Biden won in 2020 and Republicans defending two seats in Biden states.

Most neutral observers have noted that the leading Republican candidates in high-profile Senate races in Arizona, Georgia and New Hampshire are not the strongest candidates. That accounts for 21% of all GOP Senate challengers this year. (While three weak challengers in the 435-member House is unlikely to make a difference to the final outcome, it can make a huge difference in the 100-member Senate.)

Republicans have had this problem before. Primary voters in both 2010 and 2012 went against safer bets and chose more ideologically rigorous candidates. The result was that Democrats had smaller-than-expected Senate losses in 2010 and gained ground two years later.

Of course, the environment is so bad for Democrats that a few bad candidates likely won’t stop Republicans from winning the majority.

Inflation is sky-high, disposable income has dropped and even the nation’s GDP has declined. When the economy is the top concern, it’s hard to win as the incumbent party.

The good news for Democrats is that the election is still six months away. Although none of these metrics are likely to improve dramatically, all are forecast to get at least a little better by November.

The relationship between economic performance and midterm outcomes is shakier than it is for presidential elections. But we do know that voters tend to place more emphasis on recent economic growth than merely the topline figures.

Biden’s job approval rating is going to be key this fall, at a time when straight-ticket voting is very high.

Historically, the magic mark for a president in midterm elections has been 60% approval. But that may not be the case anymore with more Americans voting for the party in the White House when they approve of the president and voting against it when they disapprove.

So Biden’s approval rating may only need to be around 50% — if not a little lower should Democrats have an advantage in candidate quality.

Biden’s immediate predecessor could offer him some hope. Trump’s approval rating, per the 2018 Election Day exit poll, was about 4 points higher than what surveys showed at this point four years ago.

Biden would need even more of an improvement than Trump, though. If he can get to 47% approval by Election Day, it may be enough.

All this may be a long shot, but it’s the only shot Democrats have.

Several Republicans are vying in the May 3 primary for the open seat of retiring GOP Sen. Rob Portman. US Rep. Tim Ryan is the heavy favorite on the Democratic side.

To be clear, this is a race that is too close to call. The true margin of error (i.e., the 95% confidence interval) for the margin between the top two polling candidates in the final three weeks of the campaign has been about plus or minus 22 points since 2000. It wouldn’t be surprising if either Mandel or Vance end up winning by a massive margin, or if someone else won. After all, a quarter of the electorate remains undecided, per the Fox poll.

Trump’s support of Vance was a blow to Mandel, who was a huge booster of the former President. It has also set the primary up as a proxy battle for 2024.

Mandel has been endorsed by Texas Sen. Ted Cruz, who, like Trump, has his eyes on a 2024 bid.

Cruz trails Trump by wide margins in 2024 polling, and a Mandel loss Tuesday would only reinforce that Cruz’s name is not worth much to Republicans nationwide.

On the other hand, a Vance victory in the primary would do the opposite for Trump. It can’t be emphasized enough that Vance looked pretty much finished until the former President endorsed him. While Trump may not be as beloved by Republicans as he was a few years ago, a Vance win would show that, all else equal, Trump is still a force to be reckoned with in a Republican primary.

If Mandel or another Republican wins, then we’ll have a lot to talk about in the aftermath.

For your brief encounters: Welcome to the best time of the year

Sunday marks the start of May, if you don’t have your calendar in front of you. And while this intrepid analyst may prefer the snows of winter, most of you disagree.

Indeed, I looked at polling from 1960, 2005 and this past year, and they all found the same thing: More Americans pick May as their favorite month or second-favorite month.

In the words of Goldilocks, May, for many, is not too hot, not too cold, but just right.

April 24 brief encounter: Last week, I pointed out the polling showing support for marijuana legalization was at an all-time high. For those of you hoping marijuana will be legalized nationally, however, AWN reporting shows that, at this point at least, there aren’t enough votes in the Senate for that to happen.

Economic confidence remains quite low: The latest Gallup monthly check-in shows Americans’ economic confidence rating (which, on a scale from -100 to +100, combines current and prospective views of the economy) remains at -39. That’s tied with last month for the lowest rating since the Great Recession over a decade ago.

Stress drives college withdrawal: A third of all current college students pursuing bachelor’s or associate degrees said they had considered withdrawing from college for at least a semester, according to Gallup. The No. 1 reason (76% for bachelor’s students and 63% for those getting an associate degree) was emotional stress.

Children’s screen time rose during the pandemic: In the department of no kidding, the Pew Research Center has new data on children’s screen time since the beginning of the coronavirus pandemic. Parents of a child age 11 or younger said their kid was more likely to use a tablet computer (68% of parents in March 2020 to 81% in April 2021), smartphone (from 63% to 71%) and game console (from 45% to 51%).