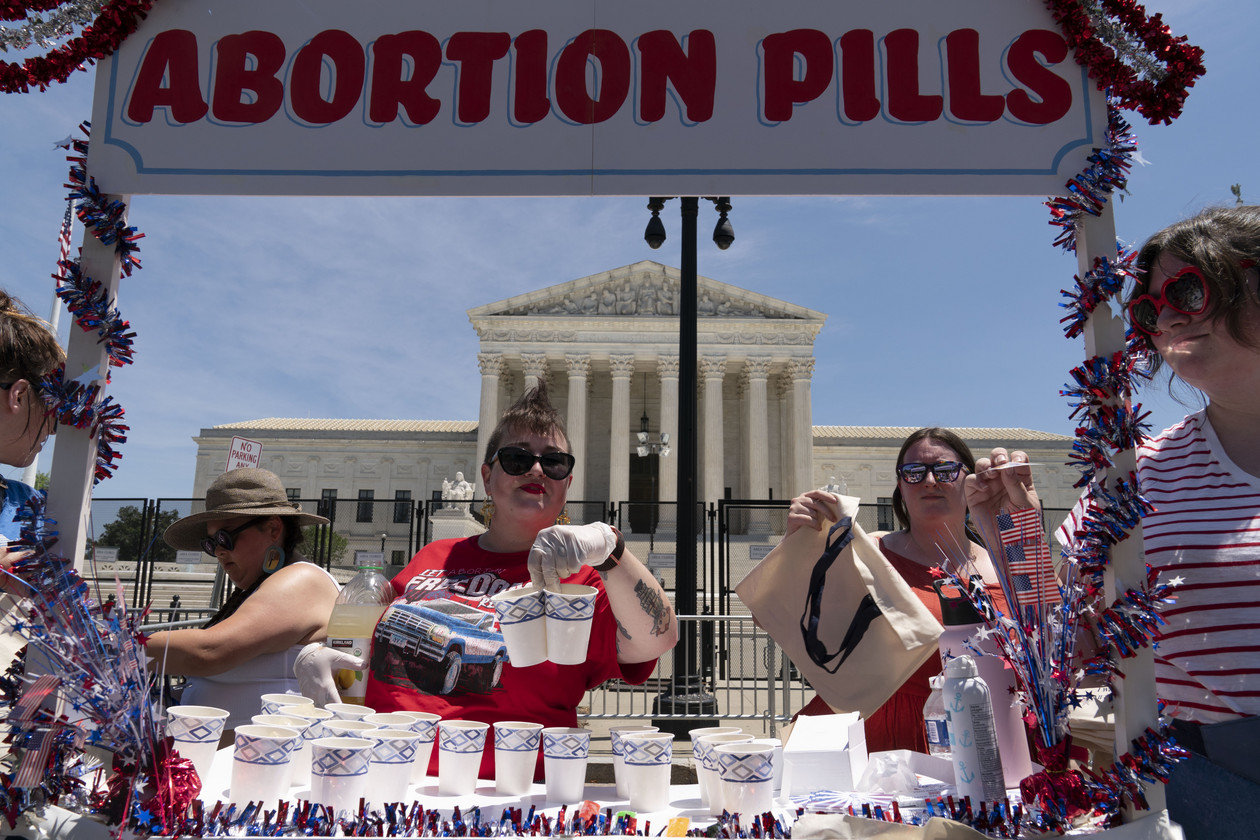 Enter “buy cytotec online cheap” into Google’s search engine and the first four results are sites that illegally offer to ship the abortion pills without a prescription.

Despite the Supreme Court’s ruling last month that gave states the right to ban the procedure, it’s still possible to get abortion medication, even in states where it’s restricted, through telemedicine or by traveling across state lines. But the patchwork of state rules is nonetheless fertile ground for scammers looking to make money off desperate abortion patients who don’t know how to navigate them.

The bad actors pose a public health threat that’s likely to grow now that eight states have banned abortion and another four have restricted it to the first six weeks of pregnancy, public health experts told POLITICO. While patients might get real pills, rogue online pharmacies sometimes sell counterfeit or expired drugs, don’t fill orders, or steal credit card numbers. And the government is ill-positioned to stop them. The FDA, which regulates pharmacies, lacks the subpoena powers that would help reveal who’s behind websites so they can be taken offline.

“Counterfeit criminals go to where there’s demand — and there’s demand and there’s access challenges,” said Libby Baney, a senior adviser to the Alliance for Safe Online Pharmacies, an advocacy group, of the market for abortion pills. “That creates criminal opportunity and a major patient safety risk.”

Google says it’s usually not able to determine when sites are breaking the law, but will remove them from search results when the government asks.

Cytotec, the name-brand version of misoprostol, is an FDA-approved prescription drug for treating stomach ulcers. It is also one of two pills used to end a pregnancy. According to a statement from drugmaker Pfizer, Cytotec is a target for counterfeiters.

But in states where abortion is restricted, patients have reported problems getting prescriptions filled for issues unrelated to abortion.

Experts said people go online for medication any time there’s a barrier to getting it lawfully. In the case of abortion, those barriers can take the form of state regulations, but also pressure from family, friends, and community leaders to keep a pregnancy. Other times, people turn to the web thinking they can get a drug at a lower cost.

Though there are legitimate telemedicine operations and online pharmacies helping connect people online in states that limit abortion, they sometimes have difficulty promoting their services. Illicit pharmacies, meanwhile, are adept at circumventing Google’s rules and rising to the top of search results.

For example, there is a bustling online black market for Viagra, the erectile dysfunction drug, because people are too ashamed to ask a doctor for it. Men seeking prophylaxis for HIV will sometimes go online if they don’t want to be seen in a sexual health clinic. During the pandemic, people have bought hydroxychloroquine, an anti-malarial drug touted by former President Donald Trump, and ivermectin, an anti-parasitic, from shady websites despite FDA warnings against using them.

“Anytime you create a fractured health care system or fractured supply chain, that confusion is going to be taken advantage of by criminals,” said John B. Hertig, an associate professor of pharmacy practice in the Butler University College of Pharmacy and Health Sciences.

State laws restricting abortion are already curtailing access to drugs that can end pregnancies, even when a patient is taking them for other reasons.

Patients have complained that pharmacies won’t fill prescriptions for methotrexate, which is used to treat the immune disorder lupus as well as other diseases, but can induce a miscarriage.

While the Biden administration has told pharmacies that failing to administer a patient’s medication is a crime, pharmacies may still be able to limit access. Some allow individual pharmacists not to fill orders if they have conscientious objections. At least one state, Texas, actively restricts the provision of abortifacients.

Price is also an issue. Rogue sites are selling Cytotec for roughly $4 per pill, a little under the typical cost per Drugs.com, a New Zealand firm that tracks prices. More than half of abortions in the United States are already induced by medication, according to the Guttmacher Institute, a research group that supports abortion rights. That share will likely rise following the Supreme Court’s decision, providing a huge market to exploit.

Extralegal, though legitimate organizations overseas have emerged to help connect people to medication abortion in states where it is illegal. For individuals, it can be hard to tell which sites are safe.

“There are a majority of U.S. consumers who think that if they see medical care listed on Google on the first page, that it’s been vetted or validated by some authority in the U.S.,” said Hertig. “And that’s absolutely not the case at all.”

All of those issues create market opportunities for unauthorized online sellers.

What they find is often labyrinthine. Of the roughly 35,000 online pharmacies worldwide, 95 percent operate illegally, according to the National Association of Boards of Pharmacy.

“In our experience, these rogue pharmacies are master marketers and they will pivot to whatever drug is in the news and popular, using it as a marketing tool to try to funnel business to their website,” said David Khalaf, a spokesperson for LegitScript, and Oregon firm that validates online health services and works with government agencies and companies to identify illegal operations.

The pandemic offers a recent example of how an atmosphere of fear and confusion can allow criminals room to operate. Between January 2020 and March 2020, scammers produced 190,000 domain names related to Covid-19, said Dan Burke, senior operations manager at the FDA’s Office of Criminal Investigations, during a June webinar on rogue pharmacies.

While scientists were still scrambling to understand the novel virus, these sites were promising cures. “We were drinking from a firehose,” said Burke.

The FDA’s criminal investigators are responsible for going after illegal pharmacies and counterfeit drug operations. It’s a tough assignment. Online, drug dealers can hide their tracks and disappear in an instant. Additionally, the office doesn’t have the necessary enforcement tools to take down sites, especially when dealing with uncooperative domain registrars.

“You could register a domain name anonymously from anywhere in the world and offer pretty much anything you want on it — and good luck trying to shut down that site, because you don’t know who’s operating it,” said Baney of the Alliance for Safe Online Pharmacies.

The European Union imposed its General Data Protection Regulation in 2018 in an attempt to protect web users’ privacy. But the regulation also made it harder to go after fraudulent sites. Domain registrars, which operate globally, stopped posting the identity of website owners in order to comply. Now, some domain registry services won’t give up information to regulators in the U.S. without a subpoena and won’t take down illegal sites without a court order, said Baney.

The FDA doesn’t have subpoena power and instead has to rely on the Justice Department, which faces its own legal hurdles.

“As a public health agency, we are in a catch-22 situation,” Burke said during the webinar. “We can’t show the scope of the network without subpoenas, but we can’t get grand jury subpoenas without showing the scope.”

Baney said that the Domain Reform for Unlawful Drug Sellers Act, a Senate bill introduced in December by Florida Republican Marc Rubio, seeks to hold domain registrars accountable. The bill would require a domain registrar to lock and suspend a domain name associated with illegal conduct once notified by the FDA or the Justice Department.

Locking a domain name prevents its owner from transferring it to a new registrar and continuing operations.

The FDA also recently pressed the Internet Corporation for Assigned Names and Numbers, a non-profit that oversees the greater domain name registry industry, to make sure that registrars are compliant with its terms of accreditation, which include responding to reports of illegal activity and abuse.

Consumers can educate themselves on what a rogue pharmacy may look like. According to the FDA, people should avoid any site that offers to sell drugs without a prescription. LegitScript also has a domain checker on its website that can verify if a site is legitimate. Plan C, a project of the National Women’s Health Network, provides a list of vetted resources for abortion pills.

Baney would like to see search engines take more responsibility. “The algorithm is controllable,” she said. “You could prioritize legitimate, licensed vendors and online pharmacies.”

A spokesperson for Google said the company works to return high quality sources at the top of search results and removes rogue pharmaceutical websites from results when the FDA determines they’re breaking the law and asks Google to do so.

Still, the rogue sites are finding a way through and patients should proceed cautiously, said Hertig. “When you’re a patient who’s struggling, because now they can’t find access to care, whether it be abortion or whatever, it’s natural that they’re gonna Google it, and that’s a really risky proposition.”