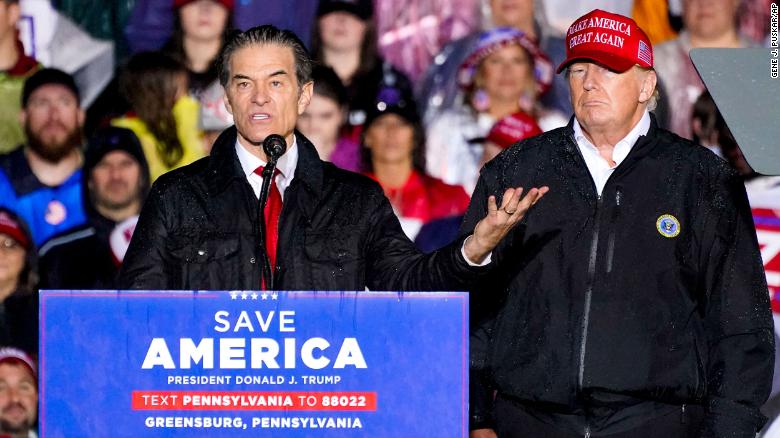 I am, of course, kidding. There is no evidence of widespread fraud in the 2020 election — in Pennsylvania or anywhere else. But it is striking that the same people who insisted, against all available evidence, that the 2020 election was stolen from Donald Trump are now silent when the result is more to their liking.

It’s almost as if the election deniers — and I am just spitballing here — were simply upset that their preferred candidate didn’t win and so decided to cry foul.

He built a national reputation on his embrace of the “big lie” that the 2020 election was stolen from Trump.

Shortly after the election, Mastriano led a state Senate committee hearing that devolved into a pep rally for Trump conspiracy theorists. Former New York City Mayor Rudy Giuliani was in attendance and the former President called in by phone to argue, falsely, that he won the election.

Mastriano continued to actively work to overturn the 2020 election results in Pennsylvania. He was not only in Washington on January 6, 2021, for the “Stop the Steal” rally, but used campaign funds to charter buses to the nation’s capital that day.

In his endorsement of Mastriano, Trump praised the state senator for fighting against (made-up) election corruption. “There is no one in Pennsylvania who has done more, or fought harder, for Election Integrity than State Senator Doug Mastriano,” Trump wrote.

And yet, for all of his railing against the 2020 election results in Pennsylvania, Mastriano said nary a word about the safety and security of the election he won Tuesday night.

Even in the Senate race, where just 2,000 votes separate Oz and McCormick, there was no mention about the potential fraud in such a close race, where outstanding mail-in ballots could swing the outcome.

“Based on how many uncounted absentee ballots there are and the margin by which Dave has won them so far, that’s why we are confident of victory. Dave will win this race,” tweeted Jeff Roe, a consultant for McCormick.

That’s a far cry from what the candidate himself told NBC recently when asked whether Biden legitimately won the 2020 election. “So the three-day extension of the ballot, the lack of secure ballot boxes, the lack of oversight in many of the precincts of Philadelphia, so the majority of Republican voters in Pennsylvania do not believe in the outcome of the election,” McCormick said. “That’s a terrible thing. If you’re somebody who served in the military for the specific purpose of making sure that our democracy thrives, that’s a major problem. So we have to fix that and one way to fix that is to have a great senator win in 2022. That makes sure that we have an accurate election in 2024.”

The utter lack of complaining about the sanctity of the election is deeply telling about why the likes of Mastriano have spent the last 18 months insisting that the 2020 election was stolen.

It’s not about facts that point to that conclusion. Instead, it’s a way to explain away an outcome that they didn’t like.