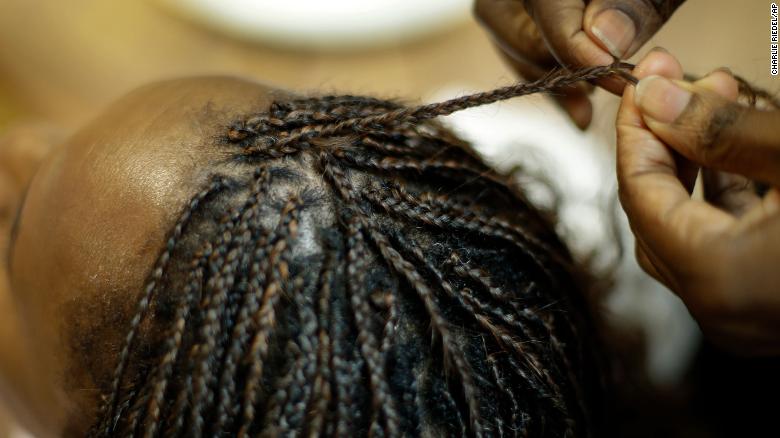 A Texas high school policy banning braided or twisted hair has stopped a teenager from attending school, according to his mother, and brought renewed attention to the CROWN Act.

Dyree Williams, 17, of East Bernard, Texas, is just one of many Black Americans who have felt discriminated against over their hair.

Advocates say the CROWN Act would help people like Williams.

What the CROWN Act stands for

The CROWN Act stands for Creating a Respectful and Open World for Natural hair.

The bill would protect against bias based on hair texture and protective styles, including locs, cornrows, twists, braids, Bantu knots and Afros.

The bill being considered in Congress would ban race-based hair discrimination in employment and for those participating in federally assisted programs, housing programs, and public accommodations.

The bill passed the US House last month but needs to be approved by the US Senate, before it’s sent to President Joe Biden’s desk.

“A lot of people are not aware that race-based hair discrimination exists,” said Esi Eggleston Bracey, who leads Unilever’s beauty and personal care portfolio and is a co-founder of the CROWN Coalition, which champions the legislation.

There are “implicit and explicit biases” against natural hair “deeply ingrained in workplace norms and society at large,” New Jersey Democrat Cory Booker, a Senate sponsor of the CROWN Act, said in a statement.

Although existing federal law prohibits race-based discrimination, “our current legislation or interpretation of it is insufficient, so the additional protection is needed,” Eggleston Bracey told AWN.

She raised the case of Williams in Texas, saying there was “no recourse for him” in a state without the protections included in the CROWN Act.

Policies, such as the high school dress code policy that barred Williams from wearing his hair braided or twisted, don’t “give us access to employment, that’s financial empowerment, it doesn’t give us access to education, which is knowledge to better ourselves,” Eggleston Bracey said. “People need to understand this is not superficial. …This is identity. And it puts us, it puts Black people under the microscope, and subjects us to humiliation, unfair inspection that’s undeserved. And all of that wears on our self-esteem.”

Black women are 80% more likely to believe that they must change their natural hair to “fit in at the office,” according to a 2019 study commissioned by personal care brand Dove, a co-founder of the CROWN coalition. The same study found that Black women’s hair was over three times more likely to be perceived as unprofessional.

Supporters of the CROWN Act say it would prevent against a larger trend across the US, with more and more Black students saying they were being penalized for their hairstyles.

The problem lies in the policies, experts say, which don’t necessarily take into account an increasingly diverse student body, to the detriment of mostly Black and biracial schoolchildren.

As AWN previously reported, there have been a number of high-profile cases in recent years of Black students receiving punishment for their hairstyles.

In Williams’ case, the new high school he moved to in February in East Bernard, Texas, had a dress code policy in its handbook that states “boy’s hair may not extend below the eyebrows, below the tops of the ears or below a conventional standup shirt collar, and must not be more than one-inch difference in the length of the hair on the side to the length of the hair on top.”

The handbook, which has been removed from the district’s website, goes on to say: “This includes but [is] not limited to tall hair styles, side swept bang styles, and long hair dangling over shaved sides or shaved back of the head. This also includes mullets and mullets in the making. Braided hair or corn rows will not be allowed. No extremes in hair styles.”

AWN made several attempts to reach the East Bernard High School and the school district, but has not heard back.

In 2020, Louisiana high school senior Asia Simo was kicked off her school’s cheer team after she accumulated demerits for having her hair out of uniform, which led to her eventual dismissal.

That same year in Texas, high school senior DeAndre Arnold was told he couldn’t walk at graduation unless he cut his dreadlocks and complied with the school district’s dress code that states male student’s hair must be shorter than the top of a T-shirt collar.

In 2019, an elementary school in Georgia came under fire after a hairstylist shared photos that the school used to show “appropriate” and “inappropriate” hairstyles for students.

And in 2018, Andrew Johnson, a Black high school wrestler in New Jersey, was told by a referee to cut off his dreadlocks because it wasn’t in compliance with league regulations or forfeit a match.

Most school administrators and school boards cite policies and regulations as reason for their actions and maintain their rules aren’t meant to be discriminatory.

Democratic Rep. Ayanna Pressley of Massachusetts, a co-sponsor of the bill, said in a floor speech in March: “For too long, Black girls have been discriminated against and criminalized for the hair that grows on our heads and the way we move through and show up in this world.”

She added, “Whether you are a student in a classroom, an employee in the workplace, or the next Supreme Court Justice or the speaker pro [tempore], you deserve to show up as your full self, rocking your crown with your head held high.”

Where the legislation stands

So far, 15 states and more than 40 municipalities have enacted their versions of the CROWN Act. California, in 2019, was the first state to pass the legislation, according to the CROWN Coalition. The US Virgin Islands this month became the first US territory to enact the bill.

Last month, the Democratic-led US House passed the federal version of the CROWN Act in a 235-189 vote, with 14 Republicans joining with Democrats to approve the bill. The fate of the bill in the 50-50 Senate remains unclear.

Republican opponents of the legislation have said that federal law already covers this kind of discrimination and that Democrats should be focusing on other issues, such as inflation and high gas prices.

The Biden administration has said it “strongly supports” the CROWN Act and “looks forward to working with the Congress to enact this legislation and ensure that it is effectively implemented.”