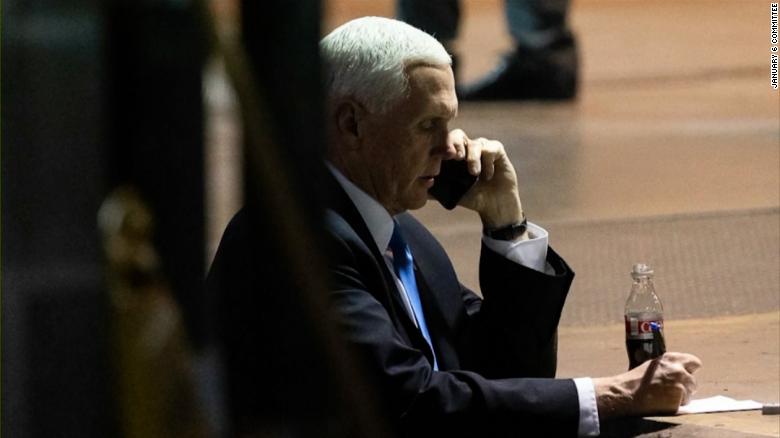 The message at Thursday’s January 6 committee hearing was simple: Mike Pence was a hero for his refusal to bow to Donald Trump’s wishes on overturning the 2020 election.

“Thanks in part to Mike Pence, our democracy withstood Donald Trump’s scheme and the violence of January 6,” said Democratic Rep. Bennie Thompson, who chairs the House select committee investigating January 6.

“Vice President Pence understood his oath of office was more important than his loyalty to President Trump. He did his duty,” said Republican Rep. Liz Cheney, the committee’s vice chair.

“That declaration of Donald Trump as the next president would have plunged America into what I believe would have been tantamount to a revolution within a constitutional crisis in America,” opined retired federal Judge J. Michael Luttig.

Look, it’s beyond question that Pence wound up resisting the public and private pressure from Trump, who called him a “wimp” and “the ‘p’ word” during a phone call on the morning of January 6, according to testimony given to the committee, to his great credit.

But one aspect of the Pence-as-hero narrative pushed on Thursday doesn’t seem to entirely hold up under scrutiny. It’s whether Pence was, from the very beginning, entirely opposed to the idea of using his power as president of the Senate to overturn the election results on January 6.

“The vice president’s first instinct when he heard this theory was that there was no way that our framers … would ever have put one person … in a role to have decisive impact on the outcome of the election.”

But that seems to run counter to what we know of Pence’s actions before January 6 — most notably in a phone call with former Vice President Dan Quayle. (Quayle, another veteran of Indiana politics, was a sounding board for Pence in the final days of Trump’s presidency.)

Here’s one exchange between Pence and Quayle as reported in the book “Peril,” by Bob Woodward and Robert Costa:

“Over and over, Pence asked if there was anything he could do.

“‘Mike, you have no flexibility on this. None. Zero. Forget it. Put it away,’ Quayle told him.

“‘You don’t know the position I’m in,’ he said, according to the authors.

“‘I do know the position you’re in,’ Quayle responded. ‘I also know what the law is. You listen to the parliamentarian. That’s all you do. You have no power.'”

That exchange seems to suggest that Pence was desperately looking to find a way to placate Trump on his January 6 demands.

That is not to say that Pence doesn’t deserve credit. Ultimately, he did his duty to the country — and did it knowing that it would likely foreclose on the possibility that he would wind up as president one day.

What it is to say is that the portrait painted of Pence — utterly resolute American hero — isn’t an entirely accurate representation of the former vice president’s mindset in the days leading up to January 6. He was a man divided. Or, at least, a man looking for a way out of a political corner.