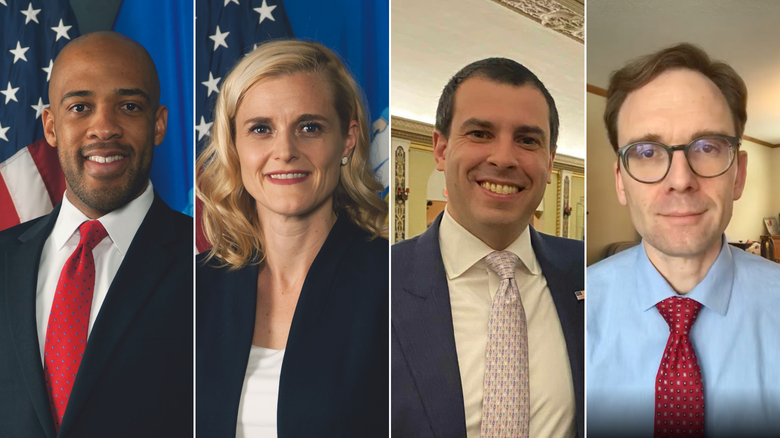 It was the moment the lifeless body of a 1,500-pound steer was hoisted in the air, blood pouring from its neck, that Mandela Barnes knew he was a long way from his comfort zone.

Born and raised in Milwaukee, Barnes’ political upbringing is intertwined with Wisconsin’s urban heart, a place that could not have been more different to the scene at Hoesly’s Meats here in rural New Glarus. As the still steaming bovines were processed, the state’s lieutenant governor turned to a few aides, his eyes the size of saucers. This was new for him, he later admitted.

The stop was one of many for Barnes over a weeklong swing last month through rural counties ahead of Wisconsin’s Democratic Senate primary this summer, the precursor for one of the party’s best chances to flip a Senate seat in 2022. It was evidence that Democrats realize that the path to unseating two-term Republican Sen. Ron Johnson will require winning back at least some of the rural voters who fled the party to back Donald Trump.

Barnes is far from the only Democratic Senate candidate looking to activate these voters: Milwaukee Bucks executive Alex Lasry has held events touting his plan for rural Wisconsin; state treasurer Sarah Godlewski, who was born in Eau Claire, has made appealing to rural voters central to her campaign; and Outagamie County executive Tom Nelson often argues he is the only candidates from a rural part of the state.

A recent Marquette University Law School poll found the Democratic race to take on Johnson wide open, with 48% of Democrats and independents who lean Democratic undecided. Barnes had 19% to 16% for Lasry, 7% for Godlewski and 5% for Nelson.

For Barnes, part of the trip was admitting that while he is somewhat politically out of place in stretches of rural Wisconsin, he is willing to listen.

“Some people think you buy a Carhartt jacket and some boots, take a couple pictures on a farm, then that’s your appeal. It’s way deeper than that,” he said after a 90-minute roundtable with farmers, some of whom previously voted for Johnson. The farmers and Barnes spoke about issues Democrats are likely to face this year, including inflation, cost of fuel and a misunderstanding of the farming way of life. In reflecting on the roundtable, Barnes added, “People don’t feel like their voices are being heard.”

For years, Democratic candidates — especially on the statewide and national level — have been rejected by voters in less populated areas, with every two years bringing a new rock bottom for the party’s standing outside its urban and suburban comfort zones. The trend began with the rise of the tea party in 2009 as a rejection of then-President Barack Obama but was accelerated by Trump’s ability to pit urban Democrats against those he branded the “forgotten” people. The break was aided by a growing belief that Democrats cared less about the rural way of life than they did about more liberal city dwellers — something amplified by a constant drum beat of talking points from conservative media outlets.

That dynamic has led to the political map of Wisconsin, like many states across America, becoming a series of blue islands in a sea of red. When Obama carried Wisconsin in 2008, he did so by winning 59 of the state’s 72 counties. Twelve years later, Joe Biden carried the state by winning just 14 counties — an uptick from the 12 Hillary Clinton won while she lost the state in 2016.

This is not a new problem for Democrats, either.

Obama, in the wake of Trump’s 2016 win that underlined the party’s rural problem, warned Democrats of becoming a “coastal liberal latte-sipping” party, full of “politically correct out-of-touch folks.” But the party has continued to struggle.

In 2018, Democratic Senate incumbents in North Dakota, Missouri and Indiana were drowned by the Trump-propelled rural surge, losing reelection despite increased turnout in suburban and urban areas amid that year’s blue wave. The trend continued in 2020: Biden’s support from suburban and smaller metropolitan areas helped deliver him the White House, but Trump sustained his strong rural margins. And in 2021, Virginia Democrat Terry McAuliffe faced intraparty criticism for essentially ignoring rural voters in his gubernatorial loss to Republican Glenn Youngkin, who managed to improve on Trump’s rural margins from just a year earlier. McAuliffe and his top aides believed the party had hit rock bottom in rural America — an assumption that was proved wrong on Election Day.

Today, Democrats hold only three of the 20 Senate seats in the country’s ten most rural states — Jon Tester in Montana, Patrick Leahy in Vermont and Joe Manchin in West Virginia — with two rural-state independents caucusing with the party. Of the 30 seats in the US House from those states, Democrats only hold six.

“We’ve got work to do out here,” said Wisconsin state Sen. Brad Pfaff, who is running to succeed retiring Democratic Rep. Ron Kind in a district that includes much of the state’s pastoral southwest. “As a national party, we’ve moved away from the basics. … I know that people out here feel overlooked and left behind. I hear that every single day… and they have a reason to be.”

He added: “As Democrats, we have missed it.”

‘That’s how we lose’

For Democrats, the focus is no longer about winning rural counties. It is about keeping the margins down so that the party’s dominance in urban areas and newfound success in suburban communities can propel them to victory.

“Voters of Wisconsin do have some independent traditions, and especially in rural areas, showing up matters, listening matters, putting in the work matters,” Baldwin told AWN, adding that the best thing Democrats can do is point out what they are fighting for and what Republicans are standing against.

Baldwin is the exception, however. Republicans, especially since Trump’s first run for president, have dominated rural areas and many Democrats are publicly and privately wondering whether it is possible for voters who backed the former President to be brought back to supporting Democratic candidates.

Barnes drew scorn in 2018 when he said “You can keep them” about voters who backed Obama but then voted for Trump and still supported the Republican President. He attempted to clean up the comment — “I could have been more clear,” he said at the time — but when pressed on the issue recently, he didn’t back away from the broader idea.

“But I truly push back on this notion that we can’t be competitive in rural parts of Wisconsin,” he added. “Do I think we’re going to win a bunch of rural counties this election cycle? No. But we’re going to make a dent, a substantial dent. We are going to lower these margins.”

As for whether a 35-year-old Black man from Milwaukee is the best candidate to cut into margins in predominantly White and older areas, Barnes laughed: “Obama was our high-water mark. … From Chicago and an even more complicated name than mine.”

Barnes’ opponents mostly say the same thing on reaching out to rural voters — they plan to show up, listen and learn. Candidates such as Godlewski and Nelson tout their own rural credentials by noting their ties to areas beyond Milwaukee and Madison. But whether that outreach will mean slimmer margins in rural counties is another question.

“That’s how we lose,” Godlewski said of the idea that Trump voters aren’t winnable for Democrats. “What we have failed at in the past is we just show up a few months before the election and expect them to say, ‘Oh, great, thanks for showing up. Now you care about me’ and really, they’re like, ‘Where have you been?'”

Godlewski admitted there is a “certain segment that you’re not going to be able to change,” who will just “fall on their sword for what they believe in.” But she said there is a large middle in Wisconsin “looking at who is the best candidate, that’s going to actually work for me and deliver for me and, quite frankly, gets me.”

Lasry said many rural voters were swayed by Trump “showing up” in Wisconsin — countless state Democrats have derided Clinton for not doing the same in 2016 — but added that many of those voters remain winnable.

“If you voted for Obama, Trump and Tammy, that means that you can be brought back into our fold,” said Lasry, who sees the race against Johnson as “change versus the establishment” with the two-term senator representing the establishment.

He added: “Before someone started voting for Trump … they voted for Tammy Baldwin and [Democratic Gov.] Tony Evers. It is not like this was decades or ages ago where we were winning in the rural parts of the state.”

And Nelson, the underdog candidate, said Democrats are currently being punished for taking rural voters for granted.

“Democrats are always on defense (with rural voters). They respond to the Republican playbook. They play into their hands,” Nelson said. “What you got to do is you come back to your message, you come back to what the Democratic Party is all about … the art of the possible.”