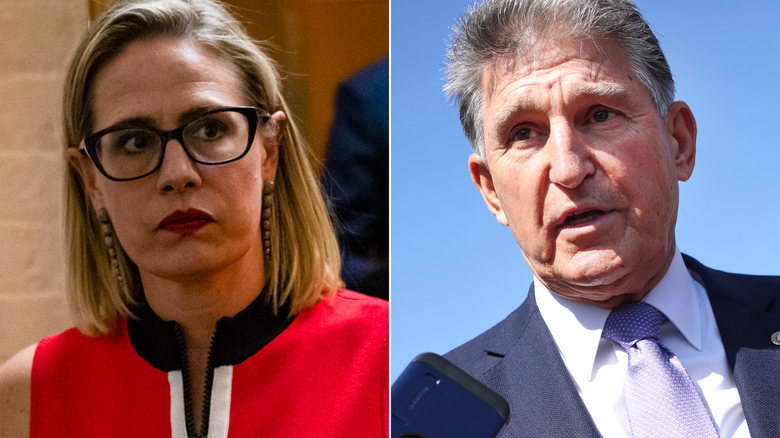 Democrats this week have the chance to validate their monopoly on political power in Washington, create a legacy of true significance for President Joe Biden and even boost their hopes in daunting midterm elections in three months.

But first they must push a back-from-the-dead climate and health care initiative through the Senate using their tiny majority, notably by locking in the crucial vote of moderate Arizona Sen. Kyrsten Sinema, who has yet to sign off on a bill that may not save Democrats in November but may at least give them a big new win to run on.

Tensions are, meanwhile, soaring between the parties, especially over a Republican blockade of a bill that would fund health care for veterans sickened by exposure to burn pits during service in America’s foreign wars. The move opened up the GOP to accusations of cruelty — and, for once, Republican leader Mitch McConnell has looked outmaneuvered.

The opening on climate did not exist a week ago. But the stunning deal between Senate Majority Leader Chuck Schumer and holdout moderate West Virginia Sen. Joe Manchin created possibilities most of the party thought were gone. Democrats, who have suffered as Biden’s legislative agenda repeatedly stalled, will be desperate to pass the bill this week before a Senate recess slows its momentum.

But there remains at least one huge question mark — the vote of Sinema, whose support is just as critical as Manchin’s in the 50-50 Senate. Like Manchin, she has opposed dismantling the Senate filibuster to pass other Democratic priority bills. She did help remodel Biden’s larger Build Back Better bill before Manchin blocked it last year. But now there are questions over whether she will back tax changes affecting private equity investors in the Manchin-Schumer compromise. As the 50th Democrat needed to pass the measure with Vice President Kamala Harris’ tie-breaking vote, Sinema has huge leverage to seek changes that threaten the bill’s fragile foundation, and she has so far avoided giving her verdict on the deal.

Manchin suggested on AWN’s “State of the Union” on Sunday that he hadn’t spoken to Sinema about the package since he agreed on it with Schumer. But he paid tribute to his Arizona colleague and her previous work on reducing prescription drugs prices — a goal that is included in the new draft law.

“When she looks at the bill and sees the whole spectrum of what we’re doing and all of the energy we’re bringing in — all of the reduction of prices and fighting inflation by bringing prices down, by having more energy — hopefully, she will be positive about it,” Manchin said. “But she will make her decision. And I respect that.”

Manchin, blanketing Sunday TV talk shows, demonstrated his power at the fulcrum of a closely divided Senate as he put his spin on the legislation — always with an eye on voters back home in a deeply red state. Once again, Manchin has succeeded in putting his state, one of the poorest and smallest in the nation, at the center of Washington policy making.

He has also used his power to champion centrism at a time when both parties seem to be moving toward their most radical base supporters. After repeatedly infuriating Democrats by thwarting Biden’s agenda, he’s now disappointing Republicans who had hoped he would maintain his opposition. On Sunday, Manchin insisted his package would lower inflation, expand domestic energy production, ensure certain corporations pay their fair tax share, and would benefit Americans by cutting prescription drugs costs for Medicare patients.

The measure would also spend nearly $370 billion on fighting climate change and developing a new green energy economy, reviving efforts that had seemed doomed just weeks ago by opposition from the coal-state senator. If the bill does pass the Senate and later makes it through the House, it would instantly transform Biden into the President who made the greatest commitment to cutting greenhouse gas emissions and would enshrine his global leadership of the effort to stave off the most disastrous future effects of climate change. It comes as extreme weather events — from drought in the American West to flooding in Kentucky that has killed at least 28 people — are ravaging the US.

The climate funding is not the only key Democratic priority in the bill.

The Manchin-Schumer bill, now rebranded as the “Inflation Reduction Act,” includes extended Affordable Care Act subsidies that would also cement another key reform wrought by Democratic power in the 21st century — Obamacare. These twin achievements could go some way to changing perceptions of the Biden presidency — which, despite some successes, including a $1.9 trillion Covid-19 rescue package and a rare bipartisan infrastructure law — has seen key agenda items like voting rights and police reform founder in the Senate.

While the passage of the bill could come too late to save Democrats from the painful punch of high inflation in midterm elections in November, it might juice turnout of progressives demoralized by the failure to do more with the party’s thin control of Washington power. Taken together with the mobilization of liberals following the conservative Supreme Court’s overturning of the constitutional right to an abortion, and majority public support for gun restrictions in the wake of a string of mass shootings, Democrats would at least have a platform to run on in November if they can succeed in weaving a coherent narrative on their achievements.

While Republican strategists believe that the House is already heading toward them, according to new AWN reporting over the weekend, a late spike in Democratic enthusiasm could spur the hopes of party leaders who believe the Senate is not a lost cause — especially against a clutch of candidates in ex-President Donald Trump’s image who could scare off suburban voters.