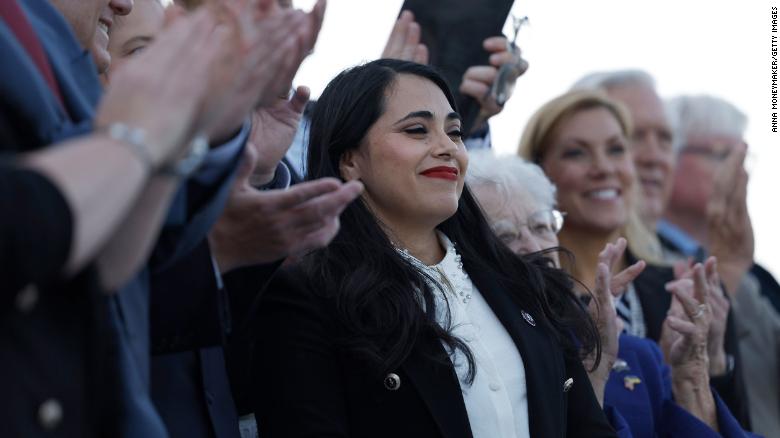 Newly elected Republican Congresswoman Mayra Flores spread conspiracies on social media that the January 6 riot at the US Capitol was caused by members of the far-left group Antifa and repeatedly used a hashtag of the QAnon conspiracy theory in tweets that have since been removed.

Flores won the special election for Texas’ 34th Congressional District last week, giving Republicans an additional seat in the House of Representatives. She beat a field of four other candidates — two Republicans and two Democrats — in the race to succeed former Democratic Rep. Filemon Vela. Vela vacated his South Texas seat in March to join a law and lobbying firm in Washington. Flores will serve out the remainder of Vela’s term and is running for a full term in November.

Before running for office, Flores was a local Republican activist who tweeted under the handle “LaRepublicana86,” where she spread false claims about election fraud and immediately began suggesting on January 6, 2021, that the Capitol riot was caused by Antifa and “infiltrators.”

In one deleted tweet from January 7, 2021, Flores retweeted a claim that DC police had let crowds go to the Capitol and Antifa was among the crowd. “DC police let them through the gates! This was a set up! Antifa is definitely among this crowd!!!,” read the tweet from conservative activist David J. Harris that Flores shared.

In at least four other instances on Twitter, Flores shared a hashtag of the QAnon conspiracy theory in April and May 2020. Media Matters previously reported Flores had used several different QAnon slogans on Facebook and Instagram, including in at least one pro-Trump ad that ran on Facebook. Flores previously told the San Antonio Express-News that she did not believe in QAnon, saying, “I’ve always been against any of that. I’ve never been supportive of it.”

Flores did not immediately respond to AWN’s request for comment.

Followers of the false QAnon conspiracy theory believe there is a “deep state” within the US government that is controlled by a cabal of Satan-worshiping pedophiles. According to the theory, the cabal is largely run by Democratic politicians and liberal celebrities who work to traffic children, and Trump was trying to take them down with the help of QAnon “patriots.” They believe their work will come to fruition on a day known as the “Storm,” when thousands of people will be arrested and face military tribunals and mass executions for their alleged crimes. The date has since passed and since Trump’s defeat, the movement has responded to unfilled prophecies in different ways, with some followers adjusting their views and others becoming disillusioned.

Flores followed the false claims of election fraud closely, according to a review of her since-deleted tweets leading up to January 2021. She said that Trump attorney Sidney Powell — who provided no solid evidence for her claims of massive voter fraud in the 2020 election and currently is embroiled in lawsuits over past comments — was an “American hero.” Flores wrote that “this election is not over” in late November 2020 and claimed on December 1, 2020, that the “liberal media” wasn’t covering voter fraud claims in Arizona.

Prior to the January 6 “Stop the Steal” rally in Washington, DC, and subsequent riot at the Capitol, Flores urged Republican members of Congress to object to the election results.

“Congressional Republicans MUST stand with @realDonaldTrump on Wednesday,” she wrote in a tweet on January 4, 2021. On January 6, Flores shared a photo of the crowd at the “Stop the Steal” rally, writing, “If we allow the Democrats to steal THIS election, they will steal EVERY election moving forward!” On the 6th, Flores tweeted she was “Praying for @Mike_Pence,” prior to the riot.