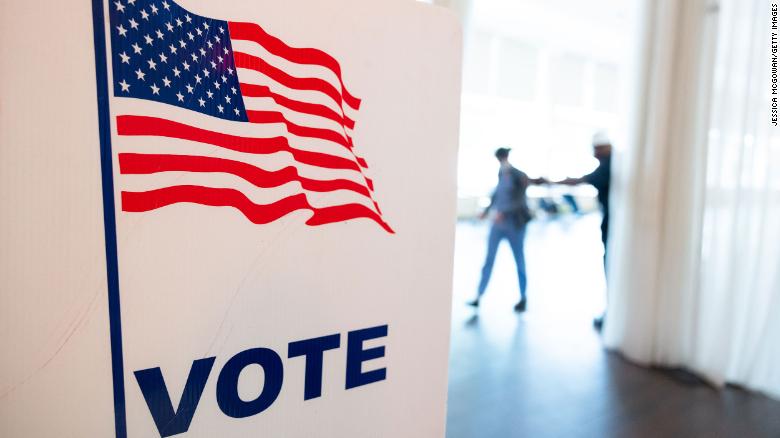 This November, the states that decided the last presidential race may send a powerful signal about the next one.

President Joe Biden assembled his winning Electoral College majority in 2020 by flipping five states that had supported Donald Trump four years earlier: Michigan, Pennsylvania and Wisconsin across the Rust Belt and Georgia and Arizona in the Sun Belt.

In November, voters in all five of those states will render verdicts on candidates virtually hand-selected by Trump in Republican primaries — including the GOP Senate nominees in Pennsylvania, Georgia and Arizona and gubernatorial nominees in all five states, except Georgia (where Republican Gov. Brian Kemp, who is up for reelection, has feuded with the former President).

Across these tipping-point states, the success or failure of Republican candidates who are cast so firmly in the Trump mold may offer important insights about the viability of the former President himself in 2024. If most of these nominees running on Trump-style messages lose this fall, even in an environment that favors Republicans overall, it would raise serious questions about Trump’s ability to recapture these critical states in 2024.

If the Trump candidates can’t win in these states “in a midterm that should be a good year for you, when normally the out party can be expected to perform better than it did in the previous presidential election,” asks Emory University political scientist Alan Abramowitz, “why would you expect better results in the presidential year” for Trump himself?

Even so, many operatives on both sides believe Trump’s hold on the GOP is so stifling that the party is unlikely to engage in a serious debate about his influence, even if the November results from these critical states send a clear warning sign about voter resistance to his direction.

“If that were possible, we would have that conversation after losing two Georgia Senate seats,” says Jason Roe, a Michigan-based Republican consultant and former executive director of the state Republican Party. “The reality is he doesn’t seem to be held accountable for his role in our losses, but only seems to be celebrated for his wins.”

These big five states, of course, are not the only places where Trump-endorsed candidates will face voters in November. But their results may be especially revealing because the states are highly likely to serve again as tipping points in the 2024 presidential race. In 2020, four of them were achingly close: Biden won Georgia, Arizona and Wisconsin by less than 1 percentage point, and Pennsylvania by only a little more; only in Michigan did he have any breathing room with a nearly 3-percentage-point margin. Operatives in both parties expect all five to be extremely close again in 2024.

Trump has left his fingerprints all over key races in all five states this fall. His endorsements helped power the nominations of GOP Senate candidates Mehmet Oz in Pennsylvania, Herschel Walker in Georgia and Blake Masters in Arizona. His embrace also lifted GOP gubernatorial nominees Tudor Dixon in Michigan, Doug Mastriano in Pennsylvania, Tim Michels in Wisconsin and Kari Lake in Arizona.

The only Republican nominees in the key statewide races across the big five with more separation from Trump are two incumbents, Wisconsin Sen. Ron Johnson and Georgia Gov. Kemp. And even Johnson has repeatedly embraced Trump-like conspiracy theories on both the coronavirus and the 2020 election. Kemp, who defended the integrity of Georgia’s 2020 election result and then defeated a Trump-backed primary challenger this year, has indicated he would welcome the former President’s endorsement and would support him if he was the GOP nominee again in 2024.

The Trump-endorsed candidates, meanwhile, have run very much in his style, echoing his lies about (or at the least refusing to acknowledge) the 2020 election result, pressing an aggressively conservative social agenda (all want to ban or restrict abortion), and regularly issuing slashing attacks on the media, “elites” and the Republican establishment. Since the primaries, some of the Trump-endorsed candidates have tried to reposition themselves slightly closer to the center (Masters most overtly), but all are still stressing arguments that would likely feature heavily in any 2024 campaign from him. And as Trump demonstrated at his Pennsylvania rally over the weekend for Mastriano and Oz, he is likely to insert himself directly into many of these races before November.

For Republicans, Trump’s increased visibility this year is, at best, a mixed blessing. All GOP campaigns hope to benefit from his unique capacity to mobilize his most ardent supporters — particularly White voters without a college education whose turnout often lags, especially in midterm elections. Yet, Democratic strategists say, Trump’s prominent role in selecting and promoting these nominees has eroded the earlier tendency among many centrist and swing voters to separate their feelings about other Republicans from their views about him because they considered Trump such a unique figure. Democratic pollster Celinda Lake says that in her focus groups many more voters now express frustration that Trump has taken over the Republican Party. “They are really surprised that insurrectionists and people who supported the attacks on the country on January 6 are running for office,” she says. “His faction is seen as having taken over and there are a lot of voters who don’t understand why Republicans have allowed this to happen but also feel like you have to stop them now.”

Both Biden and Trump enter the campaign’s final stretch in relatively weak positions across the big five states. In an array of public polls conducted earlier this summer across these states, Biden’s job approval rating has rarely peeked much above 40%. In most of those polls, Trump’s personal favorability rating was slightly higher, but in each state a majority of respondents still said they viewed him unfavorably. And most of those results came before polls this summer showed an uptick in Biden’s national approval rating, and a downturn for Trump amid all the charges buffeting him.

The resistance to Trump in these states may help Democrats offset the disappointment in Biden. In the latest Marquette University Law School poll, for instance, Wisconsin Democratic Senate nominee Mandela Barnes is winning almost one-fifth of voters who say they disapprove of Biden’s performance, an unusually high number, according to detailed results provided by Charles Franklin, the poll’s director. One reason for that is that slightly more voters in the survey expressed unfavorable opinions about Trump than about Biden, and Barnes leads Johnson by almost 65 percentage points among those hostile to the former President, Franklin found. The overall mix left Barnes with an unexpectedly comfortable lead over Johnson in the survey, even though a clear majority of Wisconsin voters said they disapproved of Biden’s performance.