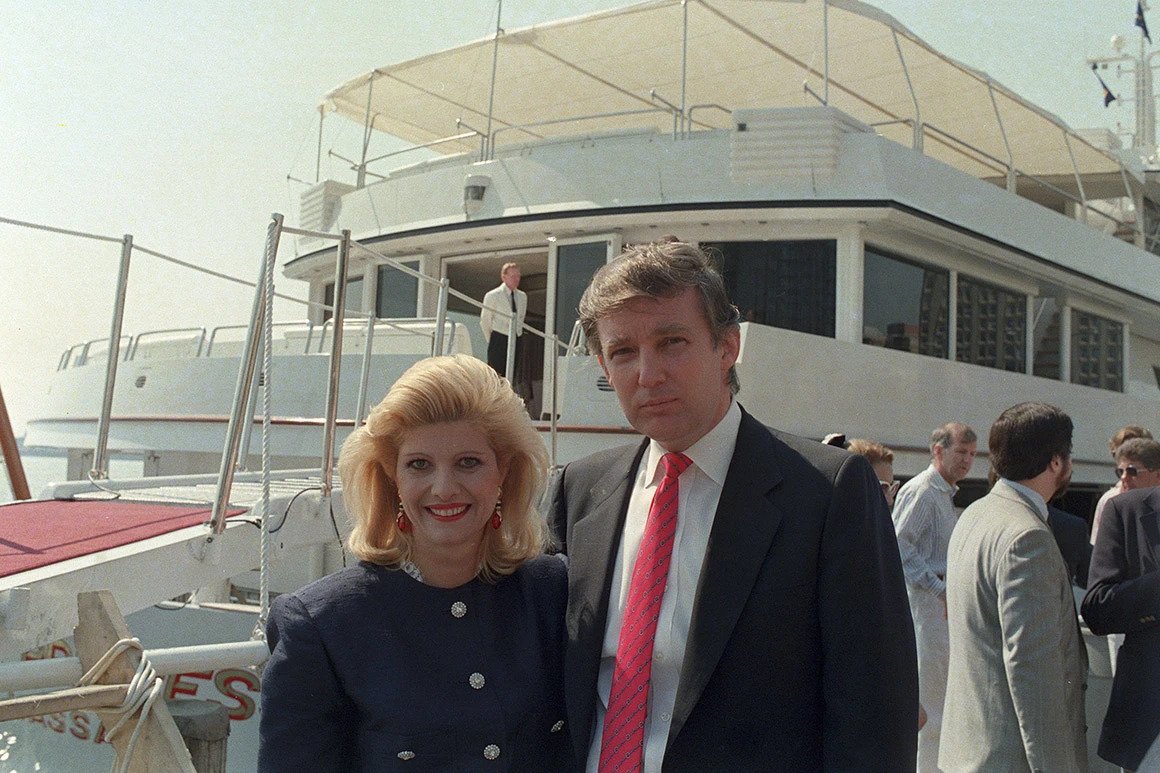 In the fall of 1976, Donald John Trump was a 30-year-old licensed real-estate broker from Queens who favored burgundy suits and burgundy patent-leather shoes. He was up to his ears in his first Manhattan development, but he still lacked an option on the site, a commitment from his supposed co-owner, comprehensive financing and signed agreements with the nine different governmental bodies that were involved.

Four years later, the Grand Hyatt, a glittering, glass-enclosed reincarnation of an older hotel next to Grand Central Station, opened. It was an instant hit, due in no small part to the financial and political connections of Trump’s real-estate developer father, Fred Trump, and his own marketing savvy. But one of the most critical factors was his fateful decision one evening in the summer of 1976 to stop off at a fashionable East Side singles bar called Maxwell’s Plum. There he met a 27-year-old Czech emigree to Canada, Ivana Zelnickova Winklmayr, who was in the city to model at a fur show and promote the upcoming Montreal Olympics. Trump paid her tab and sent roses, and soon she was commuting to New York and riding around town in a silver Cadillac with DJT license plates.

She lacked the height to be a top model, but she had steady work in showrooms due to her striking self-assurance, a legacy of her rigorous training to be a competitive skier. It was a magnet for Trump, who had been a star athlete in high school and shared a similar physical self-confidence. He was obviously smitten with her — everywhere he went, he marveled aloud at her beauty — but he was also strategic. His father’s stature combined with his own brashness had been enough to penetrate the stodgy Manhattan real-estate scene, but he was still on the outside; having a blonde bombshell on his arm, someone who could grab and hold everyone’s attention, could help him make his way to the center. But Ivana would prove to be far more than a trophy wife; she was, as Donald put it, “his twin as a woman,” and she would play a crucial role in creating the image of him as the ultimate dealmaker and the Trump brand as the emblem of the best of the best.

Over the next decade, they would become New York’s pre-eminent power couple — a status that in retrospect seems almost inevitable. Both had domineering, demanding fathers and were hyper-intense and driven; Donald’s high-school coach said he was the most competitive kid he’d ever worked with, and Ivana broke several bones training for competitive skiing but refused to quit. Both had an easy way with the truth; Donald fiddled freely with numbers when pitching deals, and before Ivana met Donald, she had what she called “a Cold War marriage” — i.e., an unconsummated, fraudulent union — to get an Austrian passport and move to Canada. Both were hardnosed about money; just before their April 1978 wedding, Donald presented her with a tight-fisted prenup prepared by his lawyer, Roy Cohn and Ivana refused to go ahead with the ceremony until it was made marginally less stingy.

But perhaps most important, both were brimming with raw ambition and laser-focused on success. Donald, who later bragged that he never changed a diaper, immersed himself in project details and future deal-making; Ivana outfitted him in classic black Brioni suits, moved them and their first child, Donald Jr., into a glossy Fifth Avenue apartment suitable for power-couple-at-home interviews, and began the social networking that would give them entrée to an upscale real estate market — all the while acting as Donald’s eyes and ears at the construction site. Her hair teased and sprayed into an enormous blonde confection, dressed in a Gucci pantsuit and Manolo spike heels, she would grill supervisors and managers, pouncing on any perceived problems and scribbling copious notes on a clipboard. It was an approach they found irritating and distracting, but she insisted was necessary to ensure adherence to what would be a Trump hallmark, a flashy, opulent aesthetic — shiny brass, mirrors everywhere and ultra-dramatic lighting. The style would find its fullest expression in Trump Tower, with its giant atrium sheathed in pink marble, overhanging balconies and suspended walkway, and 60-foot waterfall.

She would spend the next decade acting as Donald Trump’s co-pilot. doing everything from managing their 53-room triplex at Trump Tower, 45-room mansion in Greenwich, Connecticut, and 126-room Mar-a-Lago in Palm Beach to running Trump Castle Casino in Atlantic City and then the Plaza Hotel in New York City. Opening after opening, reception after reception, photograph after photograph, interview after interview, she would promote the myth of the perfect, golden marriage and of Donald’s seemingly endless stream of successful ventures.

To build the image of Donald Trump as a real-estate megastar, Ivana had put in 10-hour days at the Grand Hyatt site for months on end, clambered around Italian marble quarries in search of just the right stone for the Trump Tower lobby, and argued herself hoarse over fabric choices, surface polishes and chandelier placements. But despite her best efforts, and unbeknownst to her, the legend that she had helped to establish was in the process of unraveling. As she and the rest of the world would later learn, her husband was nothing like the business titan that she so fervently believed in. Instead, he was wildly over-leveraged, his business was in shambles, he was close to a billion dollars in debt, and he had sent her off to head up Trump Castle not as a reward for her having given her entire life over to promoting his interests but because he wanted to be free to see his mistress, Marla Maples.

But Ivana had, in effect, drunk the Kool-Aid of all the photo-ops and fawning press coverage she had helped to generate. Even after news of Donald’s affair broke, in early 1990, and newspapers across the world ran breathless he said-she said headlines and stories, Ivana had no idea how under water Donald actually was. In the end she emerged with a fraction of what she’d expected, but the relentless public spotlight had given her something that would prove immensely valuable: a large and loyal fan base who saw her as the wronged woman.

Perhaps because of personal reluctance to trash the father of her children, perhaps because of an ironclad NDA in her divorce settlement from Donald or perhaps simply because she retained the same shrewdness that had been the basis of her marriage to Donald, Ivana steadfastly refused to criticize him in public and even amended an accusation of rape she made in a divorce filing. Instead, she followed the same maxim she delivered in a cameo role in the 1996 film The First Wives Club: “Don’t get mad, get even.” Optimizing the power of the brand she had helped to create, she kept the name Trump and built a business empire of her own, based on fashion and beauty, that made her a multi-millionaire through sales of Ivana-branded perfume, jewelry, and clothing.

Satisfying as these achievements would have been, however, she must have felt a particular pleasure in her best-selling wish-fulfillment novel, For Love Alone. Published in 1992, the same year her divorce from Donald was finalized, it features a beautiful Czech immigrant who is a champion skier, builds a hotel chain, has a jet-set lifestyle and steamy sex with a businessman first husband and ultimately lands a handsome newspaper magnate. It was another myth in a long string of myths, but this time it was about her and it had a happy ending.