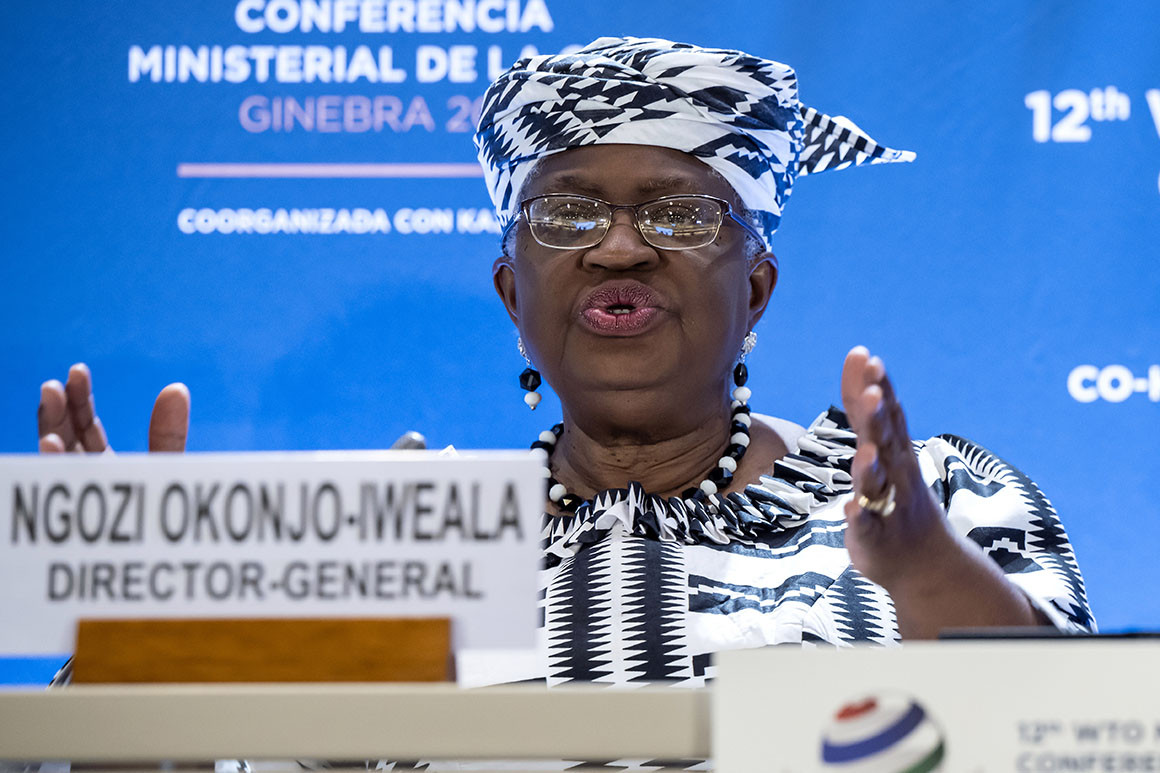 The World Trade Organization on Friday put itself back in the negotiating game by approving agreements to authorize generic versions of Covid-19 vaccines, curb some fishing subsidies and continue a 24-year-old ban on tariffs on digital goods and services on the internet.

The deals breathe new life into the moribund organization, which previously had produced only one new multilateral agreement between all 164 members in its 27-year existence.

“The outcomes demonstrate that the WTO is in fact capable of responding to emergencies of our time,” WTO Director General Ngozi Okonjo-Iweala said during a closing ceremony where members approved the agreements. “They show the world that WTO members can come together across geopolitical fault lines to address problems of the global commons and to reinforce and reinvigorate the institution.”

The package of agreements also mark the end of a roller coaster week during which India threatened to block any deals from being reached unless countries agreed to its demand to permanently exempt its public food stockholding programs from WTO rules on farm subsidies.

That debate blocked members from formally launching a new effort to reform agricultural trade policy, although Okonjo-Iweala said the organization would still proceed with discussions as part of its built-in agricultural agenda.

The international trade body also has struggled with rising tensions between two of its most important members, China and the United States. And critics say the WTO has failed to keep pace with the rapidly changing global economy in areas like crafting digital trade rules and protecting workers rights and the environment.

Here are the major outcomes of the WTO’s 12th ministerial conference:

The vaccine decision, which was nearly two years in the making, is a major win for developing countries who had to wait months longer than rich countries like the United States to receive vaccines after they were developed.

It will allow them to waive intellectual property protections on the vaccines without the patent holder’s permission in order to spur domestic production of the medicines.

“This agreement shows that we can work together to make the WTO more relevant to the needs of regular people,” U.S. Trade Representative Katherine Tai said in a statement on the waiver.

However, pharmaceutical companies fought hard to kill the provision, which they argued was not needed and would undermine the profit incentives that strong intellectual property protections provide to develop new drugs.

Vaccine access advocacy groups who wanted a much broader waiver opposed the one approved by the WTO as too restrictive and weak. They also were disappointed it does not cover diagnostic materials and therapeutics, although the agreement calls on members to decide whether to extend the waiver to those items in six months.

Tensions between the U.S. and China centered around a demand that Beijing be excluded from using the waiver. In the end, the final agreement contains a footnote that would recognize China’s statement from a previous meeting where it said it would not use the waiver as a binding commitment.

Tamping down on harmful fishing subsidies

Members also concluded a partial deal to curb harmful fishing subsidies, falling short of a fuller agreement that has been under negotiation for more than 20 years.

“WTO members have for the first time concluded an agreement with environmental sustainability at its heart” Okonjo-Iweala said. “This is also about the livelihoods of the 260 million people who depend directly or indirectly on marine fisheries.”

The deal announced early Friday would put in place rules to prohibit subsidies for illegal, unreported and unregulated fishing, while action on subsidies for fuel, ship construction and other areas was left unresolved.

“Everyone agrees that IUU fishing should be disciplined. So we were able to cover a part of it and that is stage one,” Okonjo-Iweala said. “We’ll be able to do it in one or two stages in order to complete the disciplines we would like to pursue ultimately.”

India had also blocked progress in the talks by demanding that developing nations be given a 25-year transition period to get rid of subsidies that contribute to overfishing and overcapacity in the fishing sector, instead of the seven year figure contained in the draft text of the deal.

In another area, the WTO agreed to continue a longtime moratorium on imposing customs duties on digitally-traded goods and services and other forms of e-commerce transmissions. That ban is credited with helping to accelerate the growth of the internet, but a number of developing countries increasingly see it as a source of lost revenue.

As part of the deal, members agreed to intensify discussions about the moratorium, which was first put in place in 1998, when the internet was relatively young. The ban will stay in place until the next ministerial meeting or until March 31, 2024, whichever comes first, unless members decide again to extend.

Allowing the digital duty ban to expire would have been a special embarrassment for a body that prides itself in reducing trade barriers. Business groups launched a furious lobbying effort to keep the moratorium in place and India and South Africa threatened to block its renewal in the weeks leading up to the ministerial conference.

Members also reached a deal to ensure the U.N.’s World Food Programme can source products from countries, despite any export bans or restrictions, after a long hold-out from India and South Africa. This new deal will help the humanitarian aid organization, which had told the WTO that it was facing difficulties in buying food because of trade barriers.

In a nod to concerns created by Russia’s war in Ukraine, one of the world’s largest food producers, the WTO approved a broad statement on the important role trade plays in global food security. It does not bar countries from imposing export restrictions on food products but discourages that and reiterates the WTO principle that any such measures be temporary.

Finally, the WTO agreed to embark on a process to reform the organization, which is beset by problems on a number of fronts that have made it difficult to negotiate new trade deals and to resolve trade disputes.

There is “widespread recognition that the WTO’s core functions need to be updated and improved,” Okonjo-Iweala said,

Members approved an open-ended process that makes no promises of restoring the WTO Appellate Body, which the United States killed by blocking the appointment of new judges.